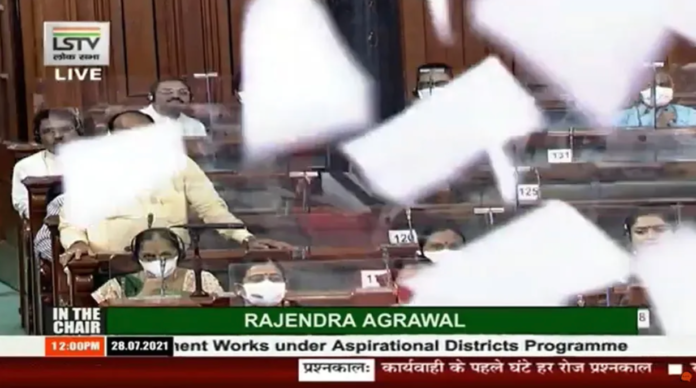 The Lok Sabha witnessed unruly scenes on Wednesday when Opposition members marched into the Well of the House, raising slogans and threw papers and torn placards at the Chair against the government over the Pegasus and farmers’ issues.

When the papers were being laid, Congress MPs Gurjeet Singh Aujla, TN Prathapan, Hibi Eden hurled business papers. While some torn pages landed near the seat of Parliamentary Affairs Minister Pralhad Joshi, majority of them landed just above the Speaker’s podium.

However, despite continuous disruptions from Congress MP, Lok Sabha speaker Om Birla continued with the Question Hour. It must be noted that Lok Sabha completed the Question Hour during this Monsoon Session for the first time due to constant protest from the Opposition.

The Bharatiya Janta Party hit out at the Opposition parties for creating ruckus, saying they have ashamed the world’s largest democracy and damaged the dignity of the parliament.

Alleging that the opposition is running away from debate, the Union Minister Anurag Thakur sought to know why the opposition “doesn’t want issues to be discussed in parliament.”