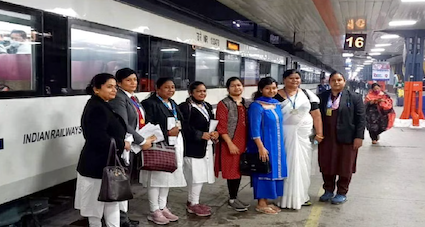 Over 4000 female candidates among the total 57,117 have been shortlisted for the post of Station Master and Traffic Assistant in Indian Railways in the recently held all-India computer-based test.

While after the final selection Station Masters would be posted across the country, Traffic Assistants would be deployed at Kolkata Metro only.

The second stage test for 6865 Station Masters and 161 Train Assistants was held on 9 and 10 May this year.

There were a total 1.8 lakh candidates scheduled to appear for the second stage computer-based test while 1.27 lakh actually appeared for the Level 6 and 4 examination in NTPC categories.

There were 21 Railway Recruitment Boards involved in the test. The options for raising objections if any regarding the questions were given by the RRBs from 13 to 18 May 2022.

While 55,787 candidates have been shortlisted for computer-based aptitude test for the post of Station Master in Level 6 against 6,865 notified vacancies and 1,330 candidates for the Traffic Assistant in Level 4 against 161 vacancies.

In all, 4,358 female candidates have been shortlisted for Level 6 and 4.

According to the Railways, the results have been prepared on the basis of actual scores obtained by the candidates. Since all candidates of one RRB were accommodated in a single shift having the same question paper, it made the result declaration process faster. The third and final test for these posts would be held shortly.