Owaisi for multi-party alliance in UP; AIMIM to contest 100 seats 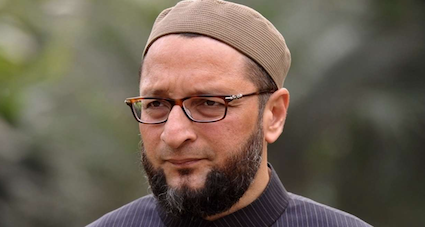 Asaduddin Owaisi’s party, AIMIM could contest 100 seats in the UP assembly polls in early 2022.

It is said that AIMIM is looking to form a multi-party alliance of which 100 would be contested by AIMIM and the rest by its alliance partners.

In all there are 403 seats in the UP assembly polls.

Reportedly, Owaisi’s alliance ahead of UP assembly elections is set to be announced on December 12 at the ‘Soshit Vanchit Society Sammelan’ scheduled to be organised in Kanpur. The latest adds to the confidence exuded by Owaisi over the presence of his party in Uttar Pradesh.

Experts have commented that his inclination to ally with parties depicts his zeal to get in touch with the ground reality of UP polls and assimilating vote banks based on communities.

Previously,  Rashtriya Lok Dal (RLD) president Jayant Chaudhary had ended speculations over the alliance with Akhilesh Yadav’s Samajwadi Party after the two met on November 23. While Akhilesh Yadav has ruled out any alliance with Congress and Bahujan Samaj Party (BSP), he has tied up with his uncle, Shivpal Yadav.

In the 2017 Uttar Pradesh elections, BJP bagged 312 seats in the 403-seat assembly, while SP secured 47 seats, BSP won 19 and Congress managed 7. Notably, UP’s past three CMs – Mayawati (2007), Akhilesh Yadav (2012) and Yogi Adityanath (2017) had not contested assembly elections, opting to be nominated to Legislative Council instead.

Akhilesh Yadav’s main competitor – incumbent CM Yogi Adityanath, who is currently nominated to the Legislative Council, will contest the polls from his home district Gorakhpur, as per sources. Similarly, other MLCs like Dy CM Keshav Prasad Maurya will contest from the Sirathu seat of Kaushambi.