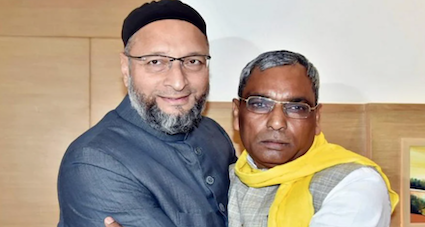 “If he asks for your votes, ask him to implement a 50% reservation for women in jobs. Implement it in politics, Lok Sabha and Assembly. Come to seek our votes only after then. Otherwise, if you come back without doing so, you won’t be able to return alive. You will come on two legs but will go back on 4 legs,” he said while addressing the huge crowd.

For the upcoming Uttar Pradesh elections, Rajbhar has been actively campaigning against the BJP and has set up the Bhagidari Sankalp Morcha, comprising a number of smaller parties, including the Asaduddin Owaisi’s AIMIM.