Pak ‘annexes’ Gilgit-Baltistan: What happened to its ‘freedom-for-Kashmiris’ farce? 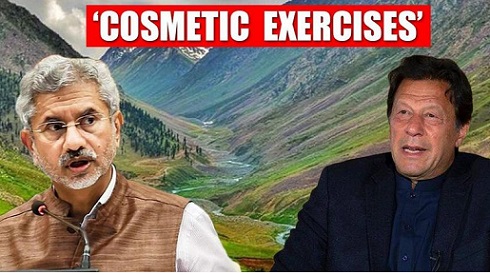 Gilgit-Baltistan, a part of undivided Jammu and Kashmir, is in the eye of a storm now that Pakistan has formally included it as a province after the elections which were held on Sunday.

Prime Minister Imran Khan’s party, by all accounts, is winning the elections but that’s a sideshow. The real relevance is how it alters the perception on Jammu and Kashmir which was turned into a Union Territory by an Indian government decree on August 5 last year.

All these years Pakistan has clamoured that people of Kashmir are oppressed by the Indian state and that they must have the freedom to choose its own path. But by including Gilgit-Baltistan as a province, occupied by them since 1947, Pakistan could no longer make that pitch. They just lost the argument. Period.

This was the tricky part which had held Pakistan back all these years even as it controlled Gilgit-Baltistan. It had found no mention in Pakistan’s constitution. The people of Gilgit-Baltistan paid taxes but had no part in electing the government in Islamabad.

However, all this was made to change by China which has invested a great deal in the $60 billion China-Pakistan Economic Corridor (CPEC) that passes through Gilgit-Baltistan. It’s vital for China to secure the seaport of Gwadar for maritime access, both strategically and trade wise. Beijing can’t afford any disruption, by terrorists or by the Indian state which increasingly has adopted a belligerent approach on Gilgit-Baltistan.

Gilgit-Baltistan has been a part of Ladakh historically which is now a Union Territory of India, separate from one of Jammu and Kashmir.

Till 2009, Pakistan treated the areas of Gilgit-Baltistan as an absolutely low priority area and made very little changes there in terms of development. However, what it did very aggressively all through 1947 to 2009 was change the demographics of the region. Punjabi Sunni Muslims and Pakistani Pushtoons were actively encouraged to encroach upon vacant terrioties and settle there.

The situation is so bad today that the locals are outnumbered by settlers from all over Pakistan. The settlers are politically more powerful, they also have access and control over various resources here.

It was on November 1, 1947, that Major Brown, a British officer in service of Maharaja Hari Singh, who was leading Gilgit Scouts, hoisted Pakistani flag in Gilgit. This signalled the culmination of a rebellion, a coup, call it what you will, against the Dogra ruler whose representative, Brigadier Ghansar Singh, was taken into custody.

Most are not aware that Ladakh had become a part of Jammu kingdom earlier than Kashmir. By 1841, most parts of the vast Ladakh region, were annexed by Dogra generals fighting for Maharaja Gulab Singh, the founder of the Dogra dynasty.

Kashmir became a part of the Jammu princely state only in March 1846. That too, not by fighting or conquest, but because the British imposed a war indemnity on the Sikhs who had just lost a war. Raja Gulab Singh paid the war indemnity as some scheming generals of a waning Lahore Durbar tried to play tricks on him. His younger brothers, Raja Suchet Singh, and Raja Dhyan Singh, besides some other close relatives, were assassinated in Lahore. This was the main reason why Gulab Singh withdrew from the Lahore Durbar after Maharaja Ranjit Singh’s death in 1839.

In his conquests of several parts of the Ladakh region, the commanders of Gulab Singh bypassed Kashmir altogether which was directly ruled by the Lahore Durbar. The wardlords of the Jammu king had travelled to Ladakh from Kishtwar.

It was to be a 60-year lease beginning in 1936 which was to end in 1996. Incidentally, it was not very different in essence from the lease of Hong Kong that Britain had taken from China. However, when the British were about to depart from the sub-continent in August 1947, Lord Mountbatten decided to return the territories of Gilgit-Baltistan to Maharaja Hari Singh, a little over a decade after the lease had started.

Maharaja Hari Singh then sent Brigadier Ghansar Singh as his representative to take over the administration of Gilgit-Baltistan. He had very few soldiers loyal to him in this far-flung outpost of his. Gilgit Scouts comprised of Muslims only, commanded by a British officer. We can perhaps say that the situation was very delicate.

Gilgit-Baltistan could have been taken back in 1947-48 first India-Pakistan war itself but for the fact that it was not treated as a priority area by the Indian government of the time.

Commendable war effort was launched to push out tribal raiders, led by Pakistani soldiers, from the Kashmir valley. However, nothing was done to win back G-B and that Himalayan blunder has come to haunt us now.