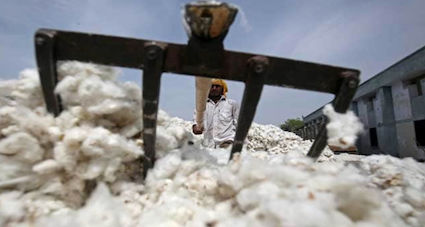 If it was Indian onions and tomatoes that many Pakistanis wanted some days ago, it is Indian cotton that is being talked about now. Textile exporters in Pakistan have approached Finance Minister Miftah Ismail to allow import of at least 2.5 million bales of cotton from India. This has been necessitated due to significant crop losses due to floods in many areas, particularly Sindh and Punjab, major cotton producing areas. The import of cotton from India is the most economical way to honour its textile export commitments.

“We have approached Finance Minister Miftah Ismail to look into one of our demands,” Pakistan Textile Exporters Association (PTEA) Patron in Chief Khurram Mukhtar said. He added actual calculations of cotton demand would be made after September 15. “We might need to import 2.5 million bales from India,” he told Dawn newspaper of Pakistan, adding that seemed to be the only viable option with lower logistics costs.

The pressure on textile exporters is due to the fact that demand for cotton textiles has been rising for the past couple of years. This trend is visible even now but the Pakistani exporters are not in a position to meet the demand as the requisite raw material is not available. Significant reduction in cotton production has been predicted due to floods as standing crop has perished in many areas.

In case his pleas are heard and acted upon by the Pakistan government, trade from Attari-Wagah border may see a significant boost after more than three years. The trade between India and Pakistan had come to a halt after August 2019 changes in Jammu & Kashmir. Before that, the volume of bilateral trade had gone down substantially when India withdrew the Most Favoured Nation (MFN) status granted to Pakistan in February 2019.

Incidentally, India had granted MFN status to Pakistan in 1996, within a year of the formation of the WTO. From 1996 to 2019, Pakistan did not grant this status to India for 23 years. However, it had cried hoarse when this status was withdrawn and India imposed 200% duties on most items that were being imported from Pakistan.

On its part, Pakistan too imposed heavier taxes and duties on the imports from India at that time. Before any resumption of trade ties, Pakistan will need to withdraw burdensome taxes imposed on Indian goods. In international diplomacy, as also trade, as in life for that matter, it is usually the principle of reciprocity that works. In a way, it is a tit for tat policy that works best and India is unlikely to restore MFN status to Pakistan this time. This makes things very tricky for the Pakistani government.

Cotton textile exports worldwide contribute significantly to Pakistan’s exchequer and their value stood at over $12 billion in first eight months of 2021-22, according to data from Pakistan Bureau of Statistics released in March 2022. Cotton yarn, cotton fabrics and bedding materials were major components of the exported material. In 2020-21, the textile exports had stood at $15.40 billion.

The minister promised to take up the issue with other coalition partners and take a decision, Mukhtar added. Incidentally, at a personal level, the FM is in favour of vegetables and other items being imported from India. But on his own, he is not capable of taking any decision because of the sensitive nature of the subject. For starting any trade with India, coalition partners who support Prime Minister Shehbaz Sharif need to be taken on board.

In fact, resuming trade ties with India is something which raises bristles in Pakistan. In March 2021, the Pakistan government wanted to import sugar and some other goods from India to ease inflationary pressure in the market. However, within 24 hours of the announcement regarding possible imports from India, then Prime Minister Imran Khan vetoed the idea. Apparently after facing the flak from PML-N, Pakistan People’s Party (PPP) and some other opposition parties.

The boot is on the other foot now. Last year’s opposition parties had come together and ousted Imran from the top executive post in April this year. It is likely that Imran will adopt same attitude towards any possible imports from India and criticise the present government. He has already given some statements hardening his position vis a vis the government of the day and may continue in the same vein.

Presently, Pakistan is allowing imports of only pharmaceuticals from India though these also remained banned for some time. There have been some discussions at the highest level in Pakistan about “need for importing goods from India’’ but no final decision has been taken so far. Earlier, there were some reports in Pakistani newspapers that Pakistan may import onions and tomatoes from India as these items had become way too costly in their markets.

Later, however, import of onions and tomatoes was allowed from Afganistan and Iran. However, these imports were unable to dent the prices in the local markets of Pakistan. These imports barely reached any interior areas and were lapped up by the residents living in border areas.

Some days ago, spokesman Arindam Bagchi of the Indian Ministry of External Affairs (MEA) was asked to comment on reports of possible resumption of trade with Pakistan. He refused to say anything beyond stating that the Indian government is aware of these reports emanating from Pakistan.