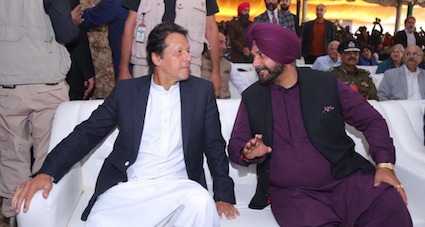 Former Punjab Chief Minister Captain Amarinder Singh posed serious allegations against Navjot Singh Sidhu claiming that he had got a message from Pakistan to reinstate Sidhu in his government because he was an old friend of their prime minister.

Discussing his alliance with the BJP and SAD(Sanyukt) in the press conference, Singh revealed, “After I dropped Navjot Sidhu from my government, I got a message from Pakistan that he is an old friend of their prime minister and he would be grateful if you can keep him in the government. If he (Sidhu) doesn’t work, then you can remove him.”

He said that a huge amount of weaponry has come in, during the course of his rule in last four years, which is a great concern for national security.  “1100 rifles, 500 pistols, RDX, lakhs of ammunition, and drones. These were dropped at particular points using drones for a purpose. That purpose is to carry out nefarious activities,” he informed.

Earlier also, Singh has called Sidhu a threat to national security because of his close relations with Pakistan and Pakistan prime minister Imran Khan.

Last week, in Chandigarh that Sidhu has “no brains” and also claimed that he had advised Congress president Sonia Gandhi five years ago not to induct this incompetent man” in the party.