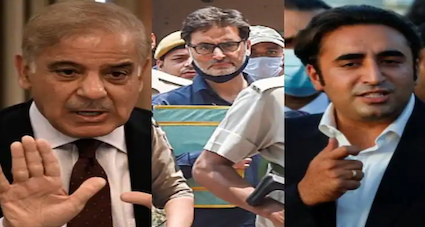 Rattled over rigorous life imprisonment to its stooge Yasin Malik, Pakistan summoned Indian Charge d’Affaires (Cd’A) in Islamabad to the Ministry of Foreign Affairs. This is the second time the Cd’A was summoned, first being on May 19 over “fabricated charges” against the separatist leader.

A while ago, their Prime Minister Shehbaz Sharif went on to call it a ‘black day for Indian democracy.’

The irony is that these reactions come on a day when Pakistan is in disarray owing to the ‘Imran Khan Azadi March’. Furthermore, while the Pakistan politicians bleat, the Pakistan Army has also effectively conceded Yasin Malik being its stooge by taking up his case and condemning the verdict.

A special NIA court, on May 19, convicted Yasin Malik after he pleaded guilty to all charges against him. According to the case registered by the NIA in 2017, Malik formed the Joint Resistance Leadership along with Syed Ali Shah Geelani and Mirwaiz Umer Farooq in 2016 in order to support the cause of Jammu and Kashmir’s secession from India. NIA accused the separatists of mobilising money from all possible sources including the Hawala network to fuel unrest and support terror activities in Jammu and Kashmir.

The Court maintained that Malik played a vital role in orchestrating protests, citing his Facebook chats that showed stone-pelting incidents were a part of a well-planned conspiracy. The agency highlighted that the JKLF leader had set up elaborate mechanism across the world to raise funds to carry out terrorist and other unlawful activities in the name of ‘freedom struggle’.

The agency also mentioned that Malik had a close association with Lashkar-e-Taiba (LeT) as well, which was evident from an email exchange. Several others such as Geelani’s son-in-law Altaf Ahmed Shah, his close aide Ayaz Akbar, businessman Zahoor Ahmed Watali; Peer Saifullah, Mehrajuddin Kalwal, Nayeem Khan, Farooq Ahmed Dar, have all been charged under Sections 120B (Punishment for criminal conspiracy), 121 (Waging, or attempting to wage war, or abetting waging of war, against the Government of India), 121A and 124A of the IPC and Sections of the UAPA.