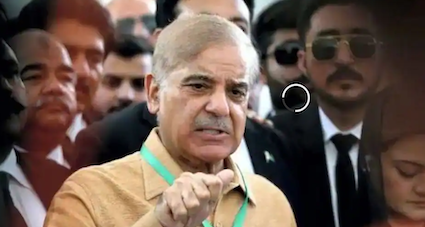 Pakistan Prime Minister Shehbaz Sharif testified today in a special court hearing in the Pakistan Rupee 16 billion money laundering case against him that he had refused to take any salary when he was the Chief Minister of Pakistan’s Punjab province, and called himself a “majnoo” for doing so.

Shehbaz Sharif and his sons – Hamza and Suleman – were charged by Pakistan’s Federal Investigation Agency or FIA in November 2020 under various sections of the Prevention of Corruption Act and Anti-Money Laundering Act.

Hamza Sharif is currently the Chief Minister of Pakistan’s Punjab province, while Suleman Sharif is residing in the UK.

The FIA investigation has detected 28 benami accounts, allegedly of the Shehbaz family, through which an amount of Pakistan Rupee 14 billion (USD 75 million) was laundered from 2008 to 2018.

The FIA examined the money trail of 17,000 credit transactions.

The amount was kept in “hidden accounts” and given to Shehbaz Sharif in his personal capacity, according to the charges.

“I have not taken anything from the government in 12.5 years, and in this case, I am accused of laundering ₹ 2.5 million,” Shehbaz Sharif said during the hearing.

“God has made me the Prime Minister of this country. I am a majnoo (fool) and I did not take my legal right, my salary and benefits,” Pakistan’s Dawn newspaper quoted him as saying.

He recalled that the secretary had sent a note to him for sugar exports during his tenure as Chief Minister of Punjab province, when he had set an export limit and rejected the notes, the report said.

Shehbaz Sharif first became Chief Minister of Punjab province in 1997 when his brother Nawaz Sharif was the Prime Minister of Pakistan.

Following General Pervez Musharraf’s coup in 1999 toppling the Nawaz Sharif government, Shehbaz Sharif along with the family spent eight years in exile in Saudi Arabia before returning to Pakistan in 2007.

He became Pakistan’s Punjab Chief Minister for the second term in 2008 and he grabbed the same slot for the third time in 2013.

“My family lost PKR 2 billion because of my decision. I am telling you the reality. When my son’s ethanol production plant was being set up, I still decided to impose a duty on ethanol. My family lost PKR 800 million annually because of that decision. The previous government withdrew that notification stating that it was injustice with the sugar mills,” he claimed.

The Prime Minister’s counsel argued that the laundering case was “politically motivated” and “based on mala fide intentions” by the erstwhile government headed by Imran Khan.