Pandya says Dhoni’s advice changed him as a cricketer 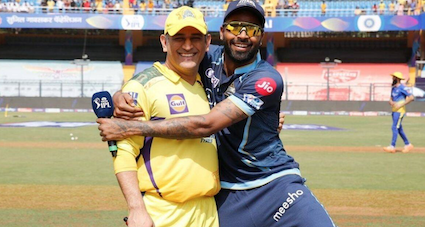 India’s victory margin of 82 runs against South Africa in the fourth T20I in Rajkot on Friday might give the impression that it was a walk in the park for the hosts, but it was not so.

The latter came at the crease in the seventh over with India three-down, and then played with responsibility before going bonkers in the final five overs.

For Pandya, the performance was a continuation of the fine form that he is in since the Indian Premier League (IPL) 2022, where he led Gujarat Titans to the title.

After the win, Pandya revealed a lesson from MS Dhoni that changed him as a cricketer.

“For me genuinely nothing changes because I play the situation, I play the symbol which is there on my chest. The only thing which I want to get better with time, it’s about how…smoothness and how frequently I can do the same thing which I did for Gujarat Titans and for India as well,” Pandya told Dinesh Karthik in a video uploaded on the BCCI website.

“Earlier in the days, Mahi bhai taught me one thing. I asked him a very simple thing like ‘how do you get away from pressure and everything?’ And he gave me a very simple advice. It was like, ‘Stop thinking about what is your score, start thinking what your team requires.’ That lesson has stuck to my mind and kind of helped me become the player which I have become. Whichever situation I go in, I assess and play accordingly.”

In the match, Karthik played a knock to remember before Avesh Khan gave his dad a “perfect birthday present” with a fiery spell as India steam-rolled South Africa on Friday to level the five-match series 2-2.

Karthik scored his maiden fifty close to 16 years after his T20 debut and alongside vice-captain Pandya took India to a fighting total.

For the second game in a row, South African batters faltered and collapsed to 87 for nine in 16.5 overs with skipper Temba Bavuma retired hurt. Avesh (4/18) led India’s brilliant display with with ball and recorded his career-best figures in the process. It was an away team’s lowest total in T20 internationals in India.