Pant and his fascination for Dhoni’s watch: Watch video 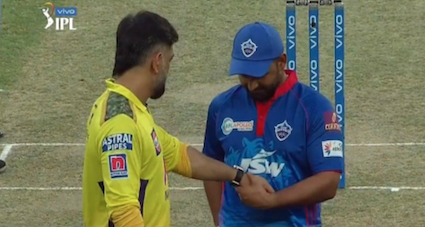 Delhi Capitals and Chennai Super Kings faced each other in the top-of-the-table clash in the Indian Premier League 2021 yesterday.  In between match, there is always that picture or a video or a moment of camaraderie that, for fans at least, bring a world of joy.

A similar light banter was also witnessed yesterday between CSK captain MS Dhoni and DC captain Rishabh Pant when the two wicketkeeper-batters stepped on the ground for the toss at the Dubai International Stadium.

When Rishabh won the toss and was asked about the experience of facing Dhoni once again in the league, the youngster said he has learned many things from the CSK skipper but at the moment, he considers Dhoni nothing but his rival.

The duo was seen to have some good time in the middle after the toss. Pant apparently drawn to Dhoni’s watch and trying to take it off the latter’s wrist.

Another fan summed up the bond between Dhoni and Pant in two words — Pure Bliss.

One of the user also shared a hilarious meme.

For unversed, the dynamic cricketer turned 24 on Monday.

On the match’s front, CSK batsmen struggled to get going and wickets were falling at regular intervals, giving DC an easy win to reach the top of the points table.