Param Bir Singh gets a dressing down from High Court: ‘Where’s FIR?’ 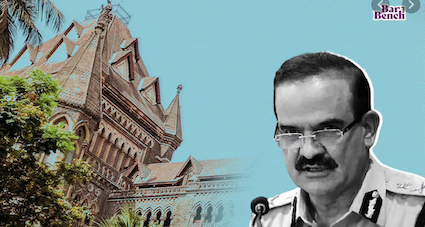 Former Mumbai Police chief Param Bir Singh cut a sorry figure in front of Bombay High Court—and the day was still not over on Wednesday.

Before the High Court adjourned for break, to reassemble after 2 p.m, it tore to smithereens Singh’s pleadings against the Maharashtra home minister Anil Deshmukh for having asked a monthly “extortion” of Rs 100 crore from the disgraced API Sachin Vaze.

The High Court grilled Param Bir Singh for not filling a FIR on the allegations he has made against the minister.

“You are a police commissioner, why should the law be set aside for you? Are police officers, ministers and politicians all above the law? Don’t view yourself so high, the law is above you,” Bombay High Court Chief Justice CJ Dutta said in disapproval.

“These are hard facts coming from the person who occupied the highest post in the police force in the city and from someone who has served for more than 30 years,” Singh told the High Court.

“There has to be an FIR to investigate. Who stops you from filing an FIR? Prima facie observation is there can be no investigation without an FIR,” the court responded.

The petition “prima facie” has no basis, said the court, adding, “Without an FIR where is the scope for us to exercise our jurisdiction?”

When Singh argued that “even a simple letter to my lords” can become a PIL (Public Interest Litigation), the court replied: “You are a police officer. If you find an offence has been committed you are duty bound to file an FIR. Why did you not do it? You are failing in your duty if you don’t file an FIR when you know an offence has been committed. Simply writing letters to the Chief Minister won’t do. We can pull you up for it. If any citizen finds an offence is being committed he is duty-bound to file an FIR.”

The FIR, said the High Court, was the “fundamental thing” and without one there could be no investigation.

“Can you show us from the complaint first hand that the Home Minister said this in your presence,” the court asked Singh.

“Is there any affidavit from the officers saying that the home minister has said this to me?”

The former police chief replied he had discussed the subject with Chief Minister Uddhav Thackeray, deputy chief minister Ajit Pawar and Nationalist Congress Party (NCP) chief Sharad Pawar. “I have mentioned the perpetuators of the crime. My pleas have not been paid heed to.  I have no other place to go,” he said.

Deshmukh has denied the allegations, which have caused a rift within ruling coalition partners Shiv Sena and NCP.

Singh had initially approached the Supreme Court, which termed it a “serious case” but asked Singh to approach the High Court.