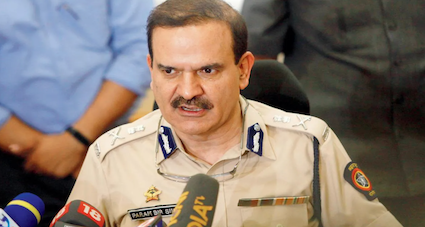 A lookout notice has been issued against former Mumbai police commissioner Param Bir Singh in the extortion case registered against the him in Thane.

While the process was initiated last week, the official circular has been released today.  This comes days after the ex-Mumbai top cop was booked by the Thane Police in two separate cases of extortion and cheating.

It must be noted that Singh after being removed from the post of Mumbai Police Commissioner on March 17, was transferred as the DG-Home Guard in March this year. However, he has not shown up to work since May 4. The sources revealed that Singh had applied for leave till July 17 and later extended it to August 7, citing his health issues as the reason. But he hasn’t returned to work yet.

A senior Thane police officer also informed that Singh is also not responding to the messages that were sent to him.

“This is a normal procedure that we have been following to ensure that the accused don’t escape,” added the officer, about the LOC. So far four FIRs of extortion, cheating and under the atrocities act have been registered against Singh. Messages sent to Singh remained unanswered,” he said.

While Tanna alleged that Singh had extored  Rs 1.25 crore from him and more than Rs 3 crore from one of his friend, Sonu Jalan even placed key evidences against Singh which includes audio tapes, CDRs, and other documents on-record during the hearing.