Param Bir Singh presents himself to NIA: Vaze to be produced at NIA court 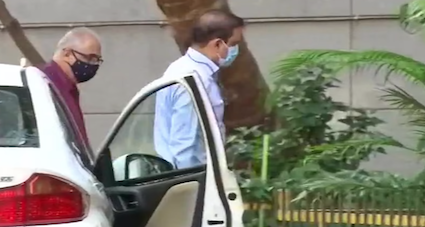 Ex-Mumbai police commissioner Param Bir Singh reached the National Investigative Agency (NIA) office this morning, likely to be interrogated on the re-instatement of Sachin Vaze in the Mumbai Police after 16 years following his suspension due to a fake encounter.

In a related development, suspended API Sachin Vaze is set to be produced at an NIA court later in the day as his current custody is ending today.

Sachin Vaze worked under and reported to Param Bir Singh. A number of luxury cars linked to Vaze have been recovered, one of them parked at Param Bir Singh’s own Office’s premises and  he is likely to be asked whether he knew about it or not.

Param Bir Singh’s interrogation by NIA was expected. It comes ahead of the Central Bureau of Investigation (CBI) recording the statement of advocate Jaishri Patil who had filed a PIL at the Bombay High Court to conduct a enquiry into the corruption allegations levelled by Param Bir Singh against former Maharashtra home minister Anil Deshmukh.

It is learnt that Sachin Vaze’s personal driver was interrogated by the NIA for six hours on Tuesday. The driver has been with Vaze since 2012. He also was in active employment of Vaze when the latter was surreptitiously leaving the CST Station on March 4.

Republic TV claims to have accessed the CCTV footage from March 4 in which Vaze is seen near the CST—the same day when businessman Mansukh Hiren was found dead. The NIA had taken Vaze to CST and Kalway railway station and recreated the crime scene. In the 40-second CCTV footage with Republic, Vaze is seen standing near the CST station.

Sachin Vaze exited the Crime Intelligence Unit (CIU) office at 6.30 pm on March 4 following which he reportedly scaled the walls of the Mumbai Police headquarters to avoid the CCTV cameras and exited through the Social Service branch’s canteen side and reached the CST station at around 7 pm.

As per RepublicWorld, Vaze took a train to Thane and reached the destination at 8.10 p.m following which he made a phone call via a SIM card provided to him by bookie Naresh, presently in NIA custody.

Meanwhile, the petition filed by Anil Deshmukh in the Supreme Court against the Bombay High Court order, asking CBI to do a preliminary inquiry into Param Bir Singh’s allegation against the ex-home minister is likely to be heard on Wednesday. Congress’ Abhishek Manu Sanghvi is representing the petitioner. Bombay High Court, while giving its order, had termed the matter “unprecedented.”