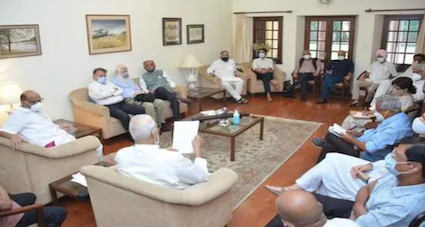 NCP supremo Sharad Pawar held a meeting of eight political parties, including Mamata Banerjee’s Trinamool Congress, the Left and Arvind Kejriwal’s Aam Aadmi Party but it was clarified it wasn’t meant to bring everyone under one umbrella against Narendra Modi and BJP.

Rashtra Manch were the organisers of the event and its founder, former Union minister Yashwant Sinha, was the first one to arrive for the meeting.

After the meeting, the ‘Rashtra Mantra’ netas came forward to address the media. NCP MP Majeed Memon began by clarifying that ‘the meeting wasn’t called to form anti BJP front’. He further said that the meeting took place at Sharad Pawar’s residence but it was called by Yashwant Sinha.

In a clip of the meeting that has come forward, NCP MP Majeed Memon can be seen addressing the leaders of the opposition. Expressing gratitude to Sharad Pawar for organizing the meeting, he said that ‘the time has come’ that the opposition should do something about the ‘challenges’ being faced by the country.

In the 2019 General Polls, the primary opposition parties present in the meeting today—NCP, AAP, TMC, RJD, CPI, NC—together able to win 36 seats and had a vote share of 9.9 percent as against BJP which alone won 303 seats with 37.7 percent vote share.

The meeting was described as a gathering to “debate current events.”

Bharatiya Janata Party reacts to the ‘Rashtra Manch’ meeting. Speaking to the media, party leader Meenakshi Lekhi said, “Such meetings are held by leaders who’ve repeatedly been rejected by the public. This is not new. There’re some companies that make a profit out of polls. They’ll obviously try to project every other leader as the next PM. No one can be stopped from daydreaming.”