Pay up Rs 1 as fine or face 3-year practice bar and 3 months jail: SC to Bhushan 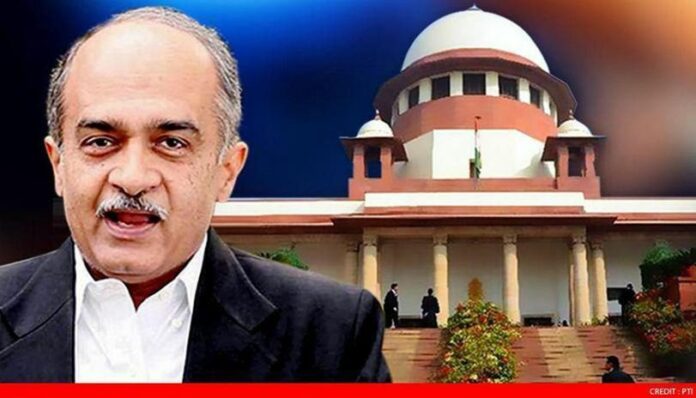 Lawyer and activist Prashant Bhushan must pay up Rs 1 as fine by September 15 or he would not only be imprisoned for three months but he would also be banned from practicing for three years.

A three-member bench headed by Justice Arun Mishra and having Justices BR Govai and Krishna Murari for company, announced the verdict on August 31, Monday.

Prashant Bhushan, it must be recalled, had been found “guilty” by Supreme Court for his two tweets which the apex court found a fit case for “contempt of court.”

Bhushan has to deposit Rs 1 as fine with the registry by September 15.

Justice Mishra, during the course of the hearing, said that Bhushan had interfered in the functioning of the judiciary, adding that freedom of speech can’t be curtailed but rights of others need to be respected too.

On August 25, senior advocate Rajeev Dhavan, representing Bhushan , had pleaded with the court to show “judicial statesmanship” and not make Bhushan a “martyr” by punishing him for his tweets.

Dhavan had said that reprimanding Bhushan like “don’t do it again” will not be correct and instead a statesman-like message should be there like “Mr Bhushan though we disagree with many things, but from next time you should be more responsible.”

Attorney General KK Venugopal had urged the top court to forgive Bhushan provided he withdraws his statements and expresses regret. On August 20, the bench had asked Bhushan to reconsider his “defiant statement” and tender “unconditional apology’ by August 24.

But Bhushan had refused to apologize to the Supreme Court, saying what he expressed represented his belief which he continued to hold. Going against them, would be a “contempt” against his own conscience, he had said.