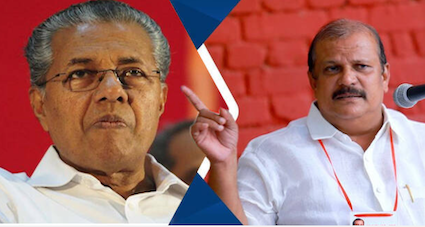 Following Kerala gold scam case prime accused Swapna Suresh’s continued allegations, former Kerala legislator PC George on Thursday slammed Chief Minister Pinarayi Vijayan. Terming the CM Vijayan-led regime as the “most corrupt” government to rule the state, George said that he wants to see the CPI(M) leader in jail for 14 days. The former Congress MLA, while launching a fresh attack on the CM, backed Suresh’s statement and said that it cannot be disbelieved.

Swapna Suresh revealed that she has declared the involvement of Kerala CM Pinarayi Vijayan and his family in the case in court. Following this, PC George came out to demand action against the CM in the matter. “Based on the revelation of Swapna Suresh, a great deal of confusion has been created. Everyone is looking at it with great shock. According to Swapna, the CM and his wife, son and daughter were involved in discussions related to the Gold Smuggling Case,” he said.

“21 times gold smuggling has not been caught. It was caught only once. This is all connected with the CM. This is the most corrupt government that has ever ruled Kerala,” he further said. “Swapna’s statement cannot be disbelieved. Smuggling gold is to harm the country. This is a dangerous situation. I want to see the Chief Minister, who has become a gold smuggler and a thief, spending 14 days in jail,” George added.

“People will have a chance to see it. He sent me to jail for one day on the charges of destroying communal harmony,” he said while mentioning his recent arrest over an alleged hate speech that he delivered. George had come under massive fire and was sent to 14 days of Judicial Custody after he allegedly made controversial remarks against the Muslim community.

PC George’s comments came amid protests demanding the resignation of Kerala Chief Minister Pinarayi Vijayan over the allegations continued in various parts of the state. However, the CM had sharply reacted to Suresh’s allegations and termed it a “part of the political agenda”. He claimed that the accused was “repeating statements” and was spreading these lies to tarnish the government.

However, Suresh dismissed CM Vijayan’s claims and said that there was no “political or personal agenda” behind her allegations. In an affidavit filed, she alleged that a bag of currency was sent for the Kerala CM, who was visiting UAE in December 2016, after CM’s Secretary Shivashankar claimed that certain ’emergency requirement’ had been left behind.