Pegasus busted: Amnesty says they never said ‘numbers’ were being spied upon 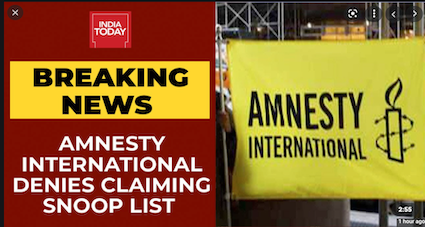 The Pegasus Project has fallen off. So it would appear after Amnesty International, one of the two—the other being Forbidden Stories—who accused Pegasus maker NSO Group of spying upon 50,000 individuals worldwide, now has backed off from that assertion.

“Amnesty International has never presented this list as ‘NSO’s Pegasus Spyware List’, although some of the world’s media may have done so,” the organisation said in a statement released on Wednesday.

As per a report in Israeli media outlet Calcalist, Amnesty International is saying that the leaked list of numbers could be potential target of spying but that is not to say those numbers are being spied upon by respective governments.

Amnesty International is now claiming that the so-called list published by multiple media, especially in India, as being spied upon is the conclusion drawn by the media and not by them!—Amnesty never said that that the leaked numbers were NSO Group’s Pegasus project for surveillance.

All hell had broken loose on Sunday when Forbidden Stories, a Paris-based non-profit group, and Amnesty International were claimed to have accessed a database of 50,000 phone numbers which were being spied upon by NSO Group’s Pegasus spyware. The Indian media were quick to latch on to the story, claiming that opposition leaders, journalists and human rights activists were being spied upon.

The Leftist propaganda website The Wire, and a few other far-Left media outlets, painted the town red even as the IT minister Ashwini Vaishnaw stated in the Parliament rubbished it, asserting such claims were made in the past too and were found to be bogus.

This is as good a moment as ever to put a lid on the case but the exposed Leftist/Lutyens Media, trust them, would come up with some other ingenuous explanation to hang on to their lies.

The NSO Group, on its part, has denied this snooping categorically and claimed they were “not related to the list published by the Forbidden Stories.” It further stated that the list of Indian phone numbers “not our, never was…the potential targets.”

“It is not an NSO list, and it never was – it is fabricated information. It is not a list of targets or potential targets of NSO’s customers,” a spokesperson for the NSO Group said, adding that “repeated reliance on this list and association of people on this list as potential surveillance targets is false and misleading.”

The company had also said that it does not have access to the data of its customers and added that its clients “are obligated to provide us with such information under investigation”. “If and when NSO receives credible proof of misuse of its technologies, it will conduct a thorough investigation, as it always had and always will,” the spokesperson stated.

Yesterday, West Bengal CM Mamata Banerjee had announced that she had plastered her smartphone because she doesn’t want to be snooped on.