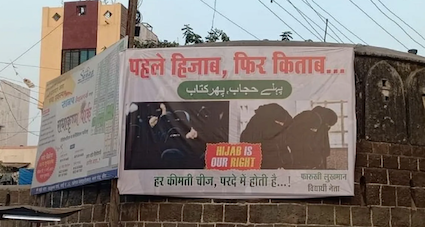 Banners have come up in Maharashtra with the text “Pehle Hijab, Fir Kitab” in the backdrop of Hijab Row presently in a mainstream discourse.

In Georai town of Beed district in Maharashtra, such slogans have happened which translate into “Hijab First; Book later”.

This happens to be the hometown of Abu Jundal who was one of the six key conspirators of the terrorist attacks of 26/11 in Mumbai that claimed 166 lives.

On the banner, it is also written that ‘hijab is our right’ and ‘har keemati cheez parade me hoti hai’ which means ‘every precious thing is kept covered’.