Peon suspended for showing video of Vijayan in shirt & trouser! 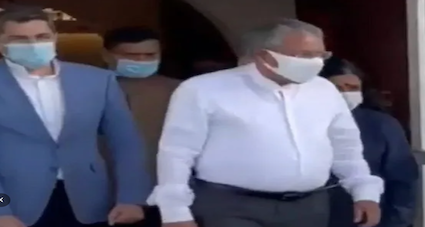 Kerala chief minister Pinarayi Vijayan came out of the Dubai airport wearing a white shirt and black trousers, and. Not the traditional dhoti and shirt.

The video was shared by A. Manikuttan in a WhatsApp group of government attendants in the Kerala state secretariat. Result? The attendant was suspended!

The video also shows a prominent Communist Party of India (Marxist) leader from Kannur talking to the media about the manner in which a leading Youth Congress leader wore a shirt and trousers instead of a khadi shirt and dhoti to sneak into a meeting called by the government to discuss the K-Rail project.

It was reported a few days ago that Kerala Chief Minister Pinarayi Vijayan will now spend a few days in Dubai before returning home. He was due to return to Kerala from the US after his treatment on January 29.

Instead of landing in Kerala, he landed in Dubai on Saturday, said sources.

The online cabinet meeting he presided over a few days ago did not include any mention of his change of plan.

He is expected to return to Kerala by February 7. The earlier plan was for him to arrive in Thiruvananthapuram after the treatment and leave for Dubai on February 3. That plan was changed later.

After a few days’ rest, Vijayan will inaugurate the Kerala pavilion during the ongoing Expo in Dubai on February 4. He is also believed to have arranged meetings with some of the UAE’s top leaders.