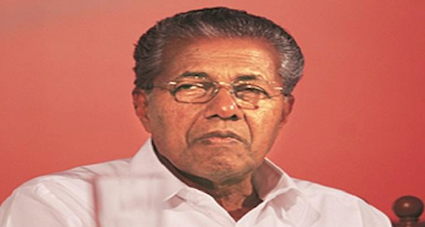 A day after Congress chief K.Sudhakaran went hammer and tongs against Kerala Chief Minister Pinarayi Vijayan and called him mafia, one from CPI-M only, Pandayala Shaji, has now called him a “gangster”.

Shaji, in his recent interview with IANS, has said that Vijayan carries a “dictatorial tendencies”. Shaji is the son of Pandyala Gopalan, a volunteer ‘captain’ of the undivided Communist Party in the state. The party was formed in 1939 at Parappuram in Pinarayi village by E.M.S. Namboodiripad, A.K. Gopalan, N.E. Balaram and P. Krishnapillai.

While Vijayan was the truest disciple of Pandyala Gopalan, Shaji didn’t believe in his ideology and had a different opinion and thus left the party to join Communist Marxist Party (CPM).

“There was no inner-party democracy in the CPI-M and Vijayan was never a communist. For someone to be a communist he should have care and love for others which sadly he does not have.”

When asked why he left the party he said that there’s a dictatorship practiced by Pinarayi Vijayan in the party. “I became an eyesore to him after I led a public programme in Thalassery town in which I shouted slogans against Vijayan owing to differences of opinion related to the job of certain private college teachers.”

He called out Vijayan for expelling teachers and allowing the educational cooperative society to take over one institution in Pinarayi town. He targeted Vijayan and said, “This was one issue Vijayan could not forget as he is a person who will never tolerate criticisms even from the son of his mentor and political leader, Pandiyala Gopalan Master.”

He explicitly mentioned that for him, Vijayan isn’t a political leader but a gangster who is running a party with the huge capital they have.

“It has several institutions, huge money, and several assets and hence people get employment, children get jobs, and admission in party-run schools, colleges, and the party have their own cooperative banks. These banks and the lure of jobs are that big, people even though they want to leave the dictatorship will not as everything in one’s life is dependent on the party,” he added

He also recalled how he was allegedly assaulted by CPI-M criminals and was smashed with iron rods and pipes while his father was going to address a public programme of the CPI-M in Thalassery.

Talking about the incident, he revealed, “Vijayan was the CPI-M district secretary in Kannur those days and I was his neighbour. My father was still continuing with the party and one evening while my father was presiding over a public program on February 11, 1992 at Thalassery town, in which Vijayan was the major speaker, I was assaulted by known CPI-M criminals in my home town at around 6.30 pm. Roads on the two sides were blocked by the CPI-M men who has a brutal majority in that town and I was hit. No one dared to touch me and no vehicles were allowed.”

He further alleged that not only Vijayan had tried to attack him, he had planned, conspired, and executed murders of his several political opponents. Even his tenure as CPI-M Kannur district secretary saw several violent political attacks in Kannur district.