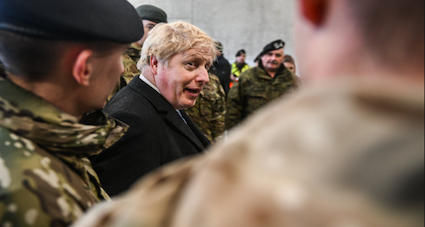 A Polish General has accused British Prime Minister Boris Johnson of disclosing the military secrets during his recent visit to India.

General Waldemar Skrzypczak stated that the UK Prime Minister is “tempting evil,” with his remarks on training Ukrainian forces overseas amid the ongoing war with Russia.

“We are currently training Ukrainians in Poland in the use of anti-aircraft defence, and actually in the UK in the use of armoured vehicles,” PM Johnson had said during his India visit earlier this week, RT News reported.

The Polish General stated that Johnson is disclosing military secrets to Russia by making such remarks.

“Training is a military matter and must be kept under wraps. The man should… think before saying such things. When we were on missions abroad it was hard to imagine that one of the politicians would talk about our plans or training on television,” Gen Skrzypczak told Polish newspaper Fakt, as per RT News.

He also went on to describe the UK Prime Minister’s behaviour “extremely irresponsible” and warned that it could have dire repercussions.  Skrzypczak said that the UK Prime Minister may not realize it, but by making such statements, he jeopardises the military operation’s success as well as the soldiers’ safety.

As per media reports, the United Kingdom has been one of Ukraine’s most steadfast supporters amid the ongoing crisis as London has already dispatched anti-tank and anti-air missile systems, as well as armoured vehicles to the war-ravaged nation.

Meanwhile, PM Johnson also paid a visit to Kyiv earlier this month to meet with embattled Ukrainian President Volodymyr Zelenskyy and assured every possible support to fight the Russian aggression.

On Saturday, PM Johnson also proposed to send tanks to Poland so that it may continue to supply Ukraine with Soviet-era armoured vehicles.

It is significant to mention here that London has also decided to reopen its embassy in Kyiv next week. It has been over two months since it was relocated from Ukraine’s capital in the wake of a Russian invasion. As the Russia-Ukraine war continues on its 60th day, the Russian forces have increased their activity in the war-torn country. Reportedly, the aim of the Russian Federation is to ‘liberate’ the Donbass region, which is in the eastern part of Ukraine.