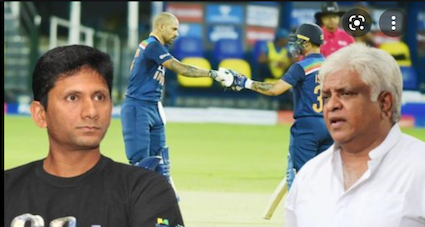 Venkatesh took to his Twitter handle and used the word ‘India B’. Praising Team India’s performance, Prasad wrote India B – B for Brilliant.

His remark comes after Ranatunga’s remark in which he accused the Sri Lankan cricket administration of agreeing to play with other Indian team.

“This is a second-string Indian team and their coming here is an insult on our cricket. I blame the current administration for agreeing to play with them due to television marketing needs,” he remarked.

However, in the match, the Indian team showed par excellence and restricted Sri Lanka to a manageable total of 262/9 from their 50 overs

In reply, Prithvi Shaw and skipper Shikhar Dhawan added 58 runs for the opening stand. Shaw scored a quickfire 24-ball 43, and his innings included nine boundaries. Dhawan remained unbeaten on a splendid 86. Prithvi Shaw was adjudged the Man of the Match for his whirlwind knock.

Indian bowlers were disciplined for the better part, without being exceptional, as Kuldeep Yadav (2/48 in 9 overs) and Yuzvendra Chahal (2/52 in 10 overs) got their share of wickets due to Lankan profligacy.