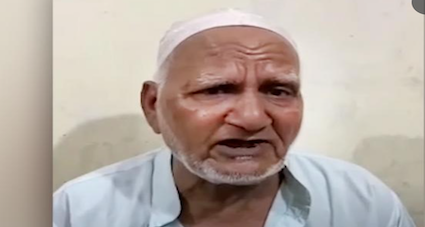 In Ghaziabad’s fake hate crime, the prime accused Parvez Gujjar confessed that he had hit Abdul Samad Saifi after losing his unborn child because of the tabeez (amulet) given to him by Saifi.

Parvez further told police that his wife was six months pregnant, and since the time he took the amulet from him the things went awry, and he lost his unborn child. This enraged him; therefore, he thrashed Abdul Samad Saifi.

According to report, Parvez is currently lodged in jail after Abdul’s agent, Intezar, filed an extortion case against him. There was a dispute between two regarding the financial transaction, after which Intezar had filed a complaint against Parvez.

Apart from that, Samajwadi Party MP Umed Pahelwan, who appeared in a Facebook Live video alongside Samad, has also fled after being booked for giving a communal angle to the incident.

Police officials said that when they reached Noida, where he was last traced, to apprehend him, he had already fled, and now they are trying to trace him with the help of Human Intelligence.

He had also taken a U-turn on his statement. Earlier, he had claimed that Samad was attacked because of communal hatred, but he denied being aware of any religious angle in the incident in his interview with Zee News. In fact, he lamented that he was being targeted since he wears a skullcap and has a beard.

On Thursday, the Ghaziabad Police also sent a legal notice to the Managing Director of Twitter India over a viral video. Accusing Twitter India of “provoking communal unrest”, the UP police directed Manish Maheshwari to report to a police station at Loni Border near Delhi and record his statement within the coming seven days.