Priyanka says 40% seats for women in UP; faces uncomfortable questions 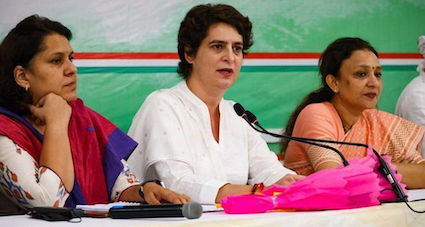 In a press conference, Congress Uttar Pradesh General Secretary Priyanka Gandhi informed that the party has decided to give 40% tickets to women in the upcoming assembly elections.

However, during the conference, when a reporter questioned the absconding Karan Morwal, the son of Congress’ Badnagar MLA Murli Morwal, who has been on the run for the past seven months in an alleged rape case, Priyanka Gandhi conveniently ducked the question.

It seems clear that for Congress, women empowerment is restricted to only Uttar Pradesh for now, considering the upcoming assembly elections.

And how convenient is her move could be gauged by the fact that Congress anyway has a negligible presence in Uttar Pradesh. If she is sincere, she should do likewise in Punjab. And nobody has forgotten how Congress humiliated a senior leader like Rita Joshi in Uttar Pradesh.

He said, “As the chief of my department, I must say whichever school has more women staffers, squabbles are bound to happen for various reasons.”

Notably, his comments came during an event on the International Girl Child Day celebration in Jaipur.