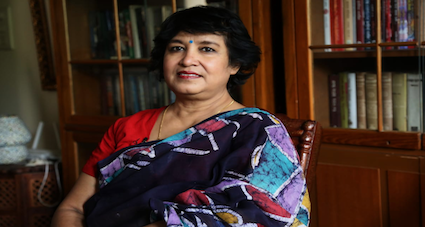 Bangladeshi author Taslima Nasreen launched a scathing attack on radical Islamists in Bangladesh, who attacked Hindu minorities and vandalized their temples on the occasion of Navratri and Dusshera, mentioning that they are exactly following prophet Mohammed, who destroyed 360 idols at Kaaba.

According to Islamic historians, the prophet Mohammed was banished from Mecca in 620 CE. Upon his return in 629/630 CE, as noted by Abdullah bin Masud, Mohammed ‘cleansed‘ the Kaaba of idols.

“Allah’s Apostle entered Makkah (in the year of the Conquest) and there were three-hundred and sixty idols around the Ka’ba. He then started hitting them with a stick in his hand and say: ‘Truth (i.e. Islam) has come and falsehood (disbelief) vanished. Truly falsehood (disbelief) is ever bound to vanish.’” [Quran 17: 81] https://daiyah.fandom.com/wiki/Destruction_of_Idols

Her direct attacks came in the backdrop of a recent targeted campaign against the Hindu minority in Bangladesh. Several temples have been attacked, Pandals vandalized, and Hindus have been killed in murderous assaults.