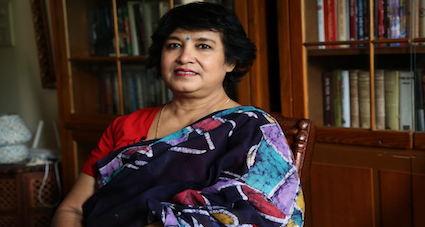 Exiled Bangladeshi author Taslima Nasreen weighed in on the massive backlash and protests triggered by controversial remarks about Prophet Muhammad by former BJP spokespersons, saying he would have been “shocked to see the madness of Muslim fanatics around the world”.

Two days ago, she had written:

Taslima Nasreen has been living in exile for nearly three decades after her book “Lajja” sparked severe criticism in Bangladesh.

The 59-year-old had to leave Bangladesh in 1994 in the wake of death threats by fundamentalist outfits who accused her of anti-Islamic views.

Although she has Swedish citizenship and has stayed in the US and Europe over the last two decades, she has mostly been in India on short residency permits and has long expressed her wish to live in the country permanently.

Two people were killed and dozens arrested after demonstrations across the country and clashes in some cities, including in Howrah near Kolkata, over the remarks by suspended BJP leader Nupur Sharma and her expelled colleague Naveen Kumar Jindal.

The comments made over two weeks ago have led to anger in India and abroad, with several West Asian countries demanding a public apology, summoning Indian envoys and seeing calls for a boycott of Indian products.