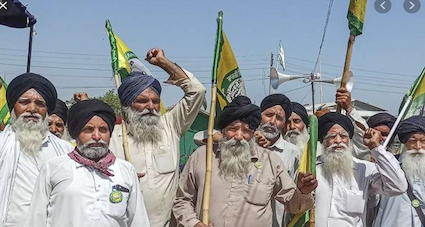 Farmers took out protest marches and raised anti-government slogans on Wednesday as they observed ‘black day’ to mark the completion of six months of agitation against the three Central agricultural laws.

Calling it a peaceful protest, Bharatiya Kisan Union (BKU) leader Rakesh Tikait informed that they will not march to Delhi.

“We are carrying black flags today because 6 months have passed and govt is not listening. We have also unfurled the tricolour as well. We are burning the effigies of the govt. Everything is peaceful.  We are also following the Covid protocols,” said Tikait.

Burning of the effigies involved ones of prime minister Narendra Modi.

Farmers were also seen burning the effigies of government leaders at Singhu, Ghazipur and Tikri border in New Delhi.

Yesterday also the farmers were gathered in large numbers at Hisar’s ‘Kranti Ground’ to protest violating the covid norms. Later on, the National Human Rights Commission (NHRC) had issued notices to Delhi, UP, Haryana on the alleged flouting of Covid norms by the protesting farmers

However, The Delhi Police have urged people not to hold gatherings amid the coronavirus pandemic and the ongoing lockdown and made it clear that it is keeping a tight vigil to deal with any situation at the protest sites on the city’s borders.

Delhi Police’s spokesperson Chinmoy Biswal mentioned that action will be taken against those who try to take the law into their hands.