Punjab wants to have its cake and eat it too; Railways won’t let that happen: Farmers’ stir 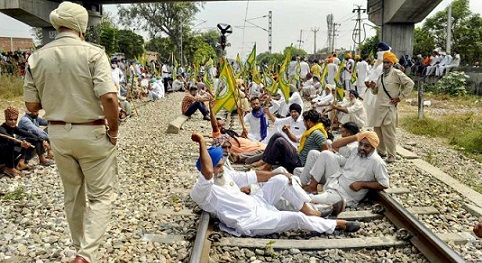 There is no coal stock left in many thermal power plants of Punjab and supply disruption is being attributed to absence of train services. The stoppage, of both goods as well as passenger trains, is in turn being blamed on the agitation by farmers who are picketing many stations. This has started biting ordinary consumers of power now as long hours of cuts, closure of industrial units and job losses are being reported.

Army personnel, who have to constantly move in and out of Jammu and Kashmir, due to deployment, too are facing problems in commuting as all trains pass through Punjab. Transport of ammunition and other vital goods too is affected but so far the impact has not caused a hue and cry. As such, all this has remained away from public eye but that may change soon.

A week from now, widespread rains, snow in upper reaches of hills and onset of winter months has been predicted. It is then that the situation may worsen significantly, in Punjab, and lead to law and order problems. A showdown between the Railways and the Punjab government is building up, with none of them willing to back off.

The agitating farmers, according to reports in local newspapers, say they are willing to let the goods trains run on tracks but will not condone any passenger traffic. The Railways say that is unacceptable as they will either run all trains, on their tracks, or none.

The Punjab government wants the Railways to run goods trains for supply of coal to feed power plants. It has even formally conveyed its request to senior Railway Ministry officials, and even Railway Minister Piyush Goyal. All these efforts have failed to yield the desired results so far.

Railway Board Chairman V K Yadav has admitted that the state government wants to start goods trains immediately. However, he said that if the Railways accept conditionality today, they can face similar situations elsewhere all over the nation. As such, he ruled out any chance of succumbing to any pressure tactics being applied.

He has made it clear that the state government has to clear all tracks to ensure “safety and security” of all traffic, be it carrying passengers or goods. It is only then that any railway traffic can resume in Punjab, he said. Punjab Minister Sukhjinder Randhawa, holding talks with the agitating farmers, chose to criticise Prime Minister for disruption of selective railway services, only goods trains! “The Centre wants to create law and order problems in Punjab,” he has alleged.

At the root of all these problems is the politics over agricultural bills passed by the Centre, and the Punjab government bringing its own legislations to nullify them in the state. In fact, the Punjab government is not willing to use force to disrupt the agitation of the farmers. If truth be told, the agitation suits it fine, except for the fact that unintended and unforeseen conditions are giving the officials sleepless nights now.

At Katra, which serves as base camp for the trek leading to cave shrine of Shri Mata Vaishno Devi, there is a small trickle of devotees. The disruption in train services means the traders are incurring losses every day. Earlier, the closure of the yatra by the authorities due to pandemic was a problem and now the disruption in railway services is the problem.

Vikramjeet Singh, who has two taxis in Jammu, says: “The impact of disruption of railway services is huge. We are unable to pay our EMIs and finding it very difficult to sustain day to day operations.” It is only the rich, or the super rich, who can drive long distances in their personal vehicles, or those who use air services are reaching Katra nowadays, he says, adding the numbers are about 1/10th of what we used to see last year.