Puri calls out Times of India ‘fake’ news: No design for PM residence yet in Central Vista project 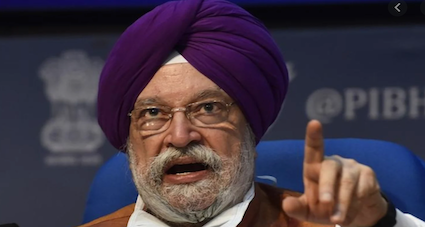 Union Minister of Housing and Urban Affairs Hardeep Singh Puri today asserted that no design for a new Prime Minister’s residence has been finalized in the Central Vista project yet and called a report in Times of India that the work for PM’s residence would start in August as “amusing.”

“Conceptual designs of PM Residence have still not been presented to the Ministry. Further, before construction starts, the design has to be finalised, approved and works have to be awarded after tendering,” said Puri to reporters.

Another important development, on the sidelines, was Delhi High Court today dismissing a fresh challenge to the redevelopment project and fined the petitioner Rs 1 lakh, describing his move as “motivated.” The construction has to be completed by November and it should be allowed to continue, said a two-member bench of Chief Justice DN Patel and Justice Jyoti Singh.

(The Centre had argued in court that the petition was “sheer abuse of the process of law”, and yet another attempt to block the project.)

“The total cost of the project construction currently underway is around 1300 odd crores… We want to finish the new Parliament building by 2022 to mark 75 years of independence,” Puri said.

He also said the decision to construct a new Parliament building was taken in 2012, when the Congress was in power.

Claiming that a false narrative is being propagated about the project, he clarified that “none of the historic, cultural, iconic buildings will be touched and will remain exactly as they are.”

He also asserted that this was “not a vanity project but a necessary project” as the current building was in a seismic zone.