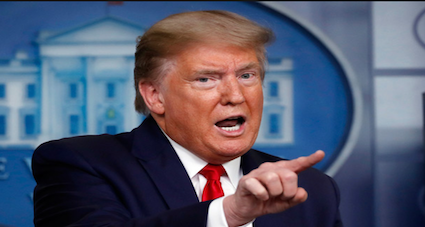 Former US president Donald Trump wished Americans a happy Easter and had a message for Leftist Democrats too: “Happy Easter to All, including the Radical Left CRAZIES who rigged our presidential election, and want to destroy our country.

In an earlier statement, Trump had called for a boycott to combat “Woke Cancel Culture” by Big Business.

“For years the Radical Left Democrats have played dirty by boycotting products when anything from that company is done or stated in any way that offends them. Now they are going big time with WOKE CANCEL CULTURE and our sacred elections,” he said in a statement.

“It is finally time for Republicans and Conservatives to fight back—we have more people than they do—by far! Boycott Major League Baseball, Coca-Cola, Delta Airlines, JPMorgan Chase, ViacomCBS, Citigroup, Cisco, UPS, and Merck. Don’t go back to their products until they relent,” he added.

“We can play the game better than them,” said Donald Trump.

Trump has been taken off from his social media accounts by the Tech giants after the storing of Capitol Hill.