Rahul arrested, alleges ‘lathi-charged’ while on way to Hathras 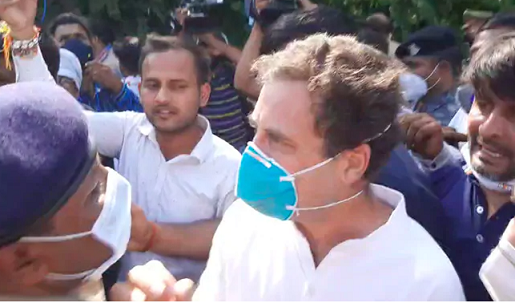 Congress leader Rahul Gandhi has alleged that he was pushed the ground and lathi-charged. He claims this happened when he was marching on the highway between Delhi and Uttar Pradesh after their convoy was stopped on its way to Hathras.

Rahul Gandhi then insisted on proceeding on foot to Hathras,  forcing UP police to arrest him under section 188 – claiming he violated section 144 imposed in the district. Gandhi argued he wished to proceed on foot alone, but police inisted on arresting him and his sister Priyanka Gandhi.

They were off to Hathras to meet the family of the gang-rape victim who died on Tuesday.

The Gandhis sat on the road with hundreds of supporters after the UP police refused to let the continue and enter Hathras.

“Just now police pushed me, lathi-charged me and threw me to the ground. I want to ask, can only Modi Ji walk in this country? Can’t a normal person walk? Our vehicle was stopped, so we started walking,” Rahul Gandhi said,

Ahead of the Congress leaders’ visit, the UP administration enforced a ban on large gatherings and put up barricades at the borders citing the coronavirus.

The Gandhis convoy was stopped at Greater Noida, some 142 kms to Hathras. Rahul and Priyanka then climbed out of their vehicle and began walking along with scores of Congress workers, shouting slogans against UP chief minister Yogi Adityanath.

Meanwhile, the Samajwadi Party also protested at the Hathras border.

UP officers claimed the restrictions had been in place since September 1 and has been extended to October 31. A senior official claimed several policemen had shown Covid symptoms.