Rahul Gandhi at ED office; Congress around country in protest 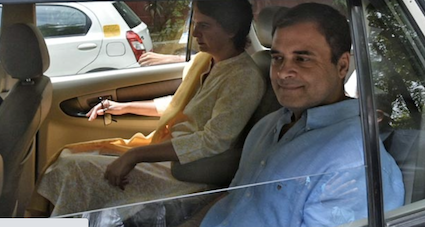 Congress leader Rahul Gandhi today reached the office of Enforcement Directorate (ED) today for questioning in the National Herald money laundering case, following a huge protest by the Congress on the streets of Delhi.

Chaotic scenes were witnessed as Gandhi, accompanied by sister and Congress general secretary Priyanka Gandhi Vadra, headed towards the ED’s office it amid party workers’ slogans against the central government.

The Congress march made it through two points of barricading but was stopped at the third where Delhi Police had deployed heavy force. After Rahul Gandhi and Priyanka Gandhi Vadra proceeded forward, many Congress leaders started a sit-in. Priyanka dropped her brother at the ED office and then left.

Police had imposed prohibitory orders today near the agency’s office. Permission for the protest march was refused last night, with the police citing “communal and law and order situation” and VVIP movements.

The Congress, however, decided to go ahead with the countrywide protest that was planned as a show of strength. Protests were held in Madhya Pradesh, Assam, Maharashtra, Uttar Pradesh and Kerala, among other states.

Addressing the media this morning, Congress leader Randeep Singh Surjewala said the barricading of the whole of Delhi “proves that the government fears us”. He described the Narendra Modi government as “coward” and said the Congress is ready to make “sacrifices”.

Rahul Gandhi is likely to be questioned about the incorporation of the Young Indian company, operations of the National Herald and the funds transfer within the news media establishment. The Congress leader later left the ED office on a lunch break.

Sonia Gandhi too has been summoned in this case. She had sought more time after she tested Covid positive. The agency has now issued her a fresh summons for June 23. Last afternoon, the Congress chief had to be admitted to a hospital in Delhi due to Covid-related issues.