Rahul Gandhi drives up to Parliament in a tractor; Delhi Police steps in 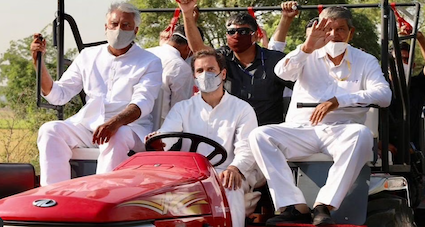 Congress leader Rahul Gandhi made a spectacle of himself by driving a tractor up to the parliament, never mind it was confiscated by Delhi Police.

Rahul Gandhi indulged in the theatrics to protest against the new farm laws. But since Section 144 is imposed in the region, not only the tractor was confiscated by a few Congress leaders, including Randeep Surjewala and Srinivas BV, and a few Congress workers were arrested.

Rahul Gandhi was not detained and he went on to attend the monsoon session of the parliament.

Speaking to media personnel, Gandhi stated that he was bringing the farmers’ message to the Parliament and claimed that the government is suppressing the voices of farmers.

The farmers’ protest has thinned out at Delhi’s borders, even as they refuse to call it off re-iterating ‘No Ghar Wapsi till Law Wapsi’. The farmers held a ‘black flag protest’ on May 26 to mark six months of protest, burning effigies of the government.