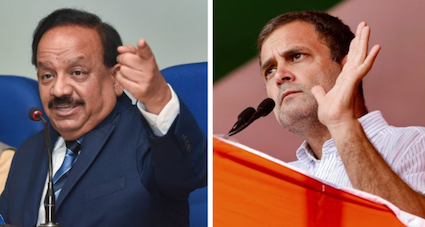 Congress leader Rahul Gandhi, who deliberately chooses to remain misinformed, made a joke of himself once again on Twitter. Gandhi took to his social media handle and wrote July has come but vaccines have not while taking a dig at central government.

However, he drew a sharp retort from senior Bharatiya Janata Party leaders and Union Ministers who, citing figures, asked if spreading “confusion” is the opposition party’s undeclared policy.

The first one to hit out at Gandhi was none other than Union Health Minister Dr. Harsh Vardhan who, in a reply, suggested Congress that they need a leadership overhaul.

He further accused Gandhi of “making irresponsible statements” and sidestepped any further discussion on vaccination by accusing him of “arrogance”.

“Just yesterday, I put out facts on vaccine availability for the month of July. What is Rahul Gandhi Ji’s problem? Does he not read? Does he not understand? There is no vaccine for the virus of arrogance and ignorance!! Congress must think of a leadership overhaul!,” he tweeted.

“I’m seeing irresponsible statements from various leaders. Stating facts so people can judge intentions of these leaders: After GoI provided 75% of vaccines available for free, vaccination speed picked up and 11.50 crore doses were given in June,” he added.

Harsh Vardhan was in no mood to spare Gandhi scion and continued targeting him. In another tweet, he hit out at the Congress-ruled states such as Punjab and Rajasthan while sharing newspaper articles and saying, “First Punjab, now Rajasthan. Pandemic profiteering is in vogue in Congress-ruled Sates.”

Union Minister Piyush Goyal also hit back at Rahul Gandhi for questioning the non-availability of Covid-19 vaccines in the country. Goyal said 12 crore vaccine doses will be available in July apart from the supply to the private hospitals. He condemned petty politics by Gandhi saying it was inappropriate in the fight against Covid-19.

Union Minister Smriti Irani also lashed out and Gandhi and asked him to stop spreading misinformation and “get vaccinated.”

At a press conference, BJP spokesperson Gaurav Bhatia said 41.60 lakh Covid vaccine doses were administered on July 1 while a total of 6.85 crore jabs have been given between June 21 and July 1 with an average daily dose of over 62 lakh.

“While the government under Prime Minister Narendra Modi is giving citizens safety shield in form of vaccines, the Congress and some other opposition parties do not want India to defeat Covid,” Bhatia claimed.

“You may hate Modi but why hate people. Is spreading confusion the undeclared policy of the Congress,” he said, attacking Gandhi.

As per the allocation sheet put out by the Centre for July, Centre has allocated 12 crore jabs to states and private hospitals in total which consist of 10 crore Covishield doses and two crore Covaxin doses.