Raids: How agencies tightened the noose around notorious PFI 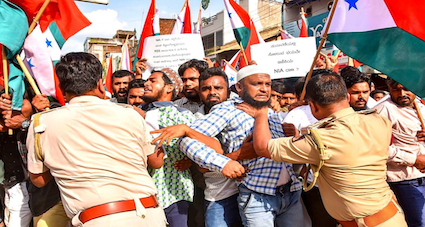 As 45 PFI members were arrested after pan-India raids on Thursday, government sources revealed to Republic TV that the massive crackdown on the outfit took months of planning and coordination.

Reportedly, security officials held meetings very discreetly to ensure that secrecy was maintained akin to the time when Article 370 was abrogated. Back then too, everyone was taken by surprise as Jammu and Kashmir’s special status was revoked.

As per sources, the Centre was mulling action against the PFI for the last 3-4 months. In a bid to ensure proper coordination, the NSA met Kerala Police officials when PM Modi visited Kochi for the commissioning of the aircraft carrier INS Vikrant earlier this month, sources added. Subsequently, he moved to Mumbai where he stayed at the Raj Bhavan to meet security officials. To prevent PFI cadres from fleeing, the operation was executed around the same across states. Sources indicated that more operations would be required to nab other PFI cadres.

When the crackdown on the PFI took place, Union Home Minister Amit Shah chaired a key meeting at his official residence in the national capital. Ajit Doval, Union Home Secretary Ajay Bhalla, NIA Director-General Dinkar Gupta and other officials were present at the meeting. Meanwhile, the PFI and its political arm Social Democratic Party of India released statements condemning the action taken by the central investigative agencies.

Formed in 2006, the PFI has come under the scanner for its alleged involvement in various anti-social and anti-national activities. Its political front- the SDPI came into existence in 2009 and has contested elections. In April 2021, Solicitor General Tushar Mehta told the Supreme Court that the Centre is in the process of banning PFI.

These searches were conducted at the houses and offices of the top PFI leaders and members in connection with 5 cases registered by the NIA. This was based on the inputs and evidence that the PFI leaders and cadres were involved in the funding of terrorism and terrorist activities, organising training camps for providing armed training and radicalising people to join banned organizations. During the raids, incriminating documents, cash, sharp-edged weapons and a large number of digital devices were been seized.