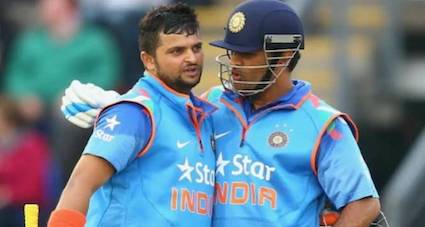 Suresh Raina became the fourth player to breach the Rs 100-crore mark for earnings from the much watched Indian Premier League (IPL) after he was given contract for 2021 season. M S Dhoni, Virat Kohli and Rohit Sharma are the other three who had earned more than this staggering figure before 2021 season.

Luckily for him, Raina was retained by Chennai Super Kings (CSK), a team donned in yellow led by Dhoni. This despite the fact that he returned home from UAE without participating in the CSK matches. His retention is being attributed to the backing he got from the team captain.

It was being speculated that the CSK may not pick up Raina for the coming season, displeased with his return from UAE. In the 14th edition of IPL, Raina will get a purse of Rs 11 crore from his franchisee.

The 2020 IPL season played at UAE did pose problems for CSK in Raina’s absence as it could not score victories. A year earlier, in 2019 IPL season, Raina’s performance was below par compared to his past stints. Despite that, the CSK has reposed faith in his experience and credibility he has.

In most seasons, Raina has played for CSK and played with another franchisee when this team was suspended from the tournament. The CSK management apparently believes that he can play an important role with Dhoni to revive the fortunes of the team.