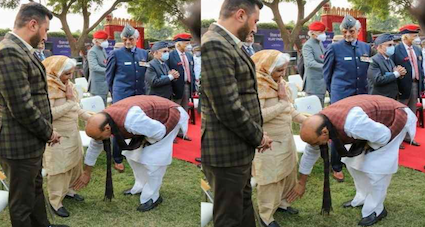 Defence Minister Rajnath Singh touched the feet of Dhanno Devi, the wife of Col Hoshiar Singh who was conferred with India’s highest military honor, the Param Vir Chakra, for displaying exemplary courage and indomitable fighting spirit in the 1971 war with Pakistan.

Devi was part of a group comprising Indian veterans of the war, their family members, and ‘Mukti Jodhas’ of Bangladesh with whom Singh held an interaction.

Addressing the ‘Vijay Parv Samapan Samaroh’, Rajnath Singh said, “India’s victory in the Indo-Pakistani War in 1971 proved to be the most important victory in world history. Pakistan had lost one-third of its army, half of its navy and one-fourth of its air force in this war.”

The Defence Minister further termed the surrender of 93,000 Pakistani soldiers in the 1971 war as a “historic surrender in the history of the world.”

He also paid rich tributes to the brave soldiers, sailors, and air warriors who ensured the victory in the 1971 war by making supreme sacrifice while displaying devotion to duty.

“You have been the guards of our unity and integrity including the borders of our country. Today our country is moving forward on its path of progress uninterrupted. The country sleeps soundly because people like are remain awake. Your sacrifice towards the country cannot be repaid.”