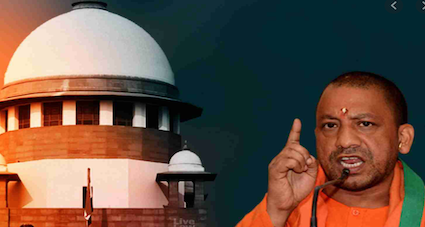 The Supreme Court has pulled up and stayed a recent Allahabad High Court order and the measures it suggested to the Yogi Adityanath government in Uttar Pradesh on the Covid-19 pandemic.

The Allahabad High Court, while terming the healthcare system in the State as “Ram Bharose”, suggested a series of directions this week, from providing ambulances with ICU facilities in villages to making oxygen beds available in nursing homes to up-gradation of medical college hospitals.

This had led to a “judicial overreach” outcry in public domain. Now, it’s learnt that the Supreme Court has said that High Courts should refrain from passing orders which cannot be implemented.

A Supreme Court bench of Justices Vineet Saran and Bhushan Gavai stayed the order after hearing submissions made by Solicitor General of India Tushar Mehta, who appeared on behalf of the state of Uttar Pradesh.

“We are of the opinion that High Courts should normally consider the possibility of execution of their directions. If such directions cannot be implemented, then such orders may not be passed. The doctrine of impossibility is equally applicable to courts,” the Supreme Court said.

In its appeal, the Uttar Pradesh government had lamented that the Allahabad High Court had failed to appreciate the ground realities. The Solicitor General added that the “Ram Bharose (at the mercy of God)” remark by the High Court would demoralise the healthcare workers.

Further, the State government states that the High Court order “effectively ventures into the arena of governance by breaching the salutary principles of separation of powers between the judiciary and executive, (and) deserves to be set aside.”