Ramiz Raja recalls what he had said about Imran Khan 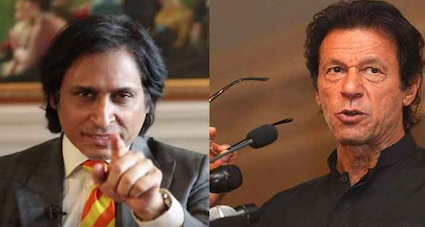 Pakistan Cricket Board chief Ramiz Raja has tweeted an old video of his, from 2019, in which he can be seen speaking about Imran Khan.

In the video, Ramiz Raja talks about the reasons why he thought Imran would succeed as Prime Minister of Pakistan; Imran Khan was elected PM in August 2018.

Ramiz Raja was an integral part of the Pakistani cricket team, led by Imran Khan, that had won the 1992 cricket World Cup.

A renowned cricket commentator, Ramiz was given the top job in Pakistan cricket in September last year.

Ramiz posted the video with the caption, “Dare I say more!”.

“You might do whatever analysis and talk about issues like inflation and other things. Please mark my words and it is actually a prophecy. He (Imran Khan) will succeed. He is bound to succeed. You can try your best but he will succeed and will prove you wrong again and again. This is because he has good intentions, he is hardworking and very intelligent,” Ramiz Raja can be heard saying had said in the clip of the old interview with famous Pakistani actress Samina Peerzada

Ramiz’s tweet came on a day when a no-confidence motion against Imran Khan was dismissed by the deputy speaker of the National Assembly (NA) Qasim Suri. Khan, thereafter, asked the president to dissolve the national assembly and asked for fresh elections.

“In a televised address, Khan said the conspiracy to topple his government has collapsed.

“The people should decide what they want, not foreigners. Buying people’s support with money has resulted in this (situation). Put that money into something better, for orphanages etc. I implore the nation to prepare for elections. You will decide the future of this nation, not foreigners or corrupt people,” Khan said in his address.

I have advised the President to dissolve the Assemblies. This a democratic society. Let us democrats go to the people. Let the elections be held, let the people decide who they want. A conspiracy from outside, and these corrupt people should not be allowed to determine this country’s destiny by buying off people with bags of money,” he said.

Targeting his rivals, he said they have spent crores to buy support, but all this expenditure will be wasted. “They should open orphanages and distribute money among people,” he said.