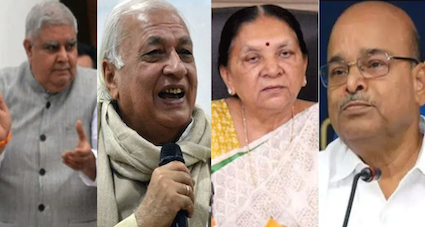 Eight new Governors appointed on Tuesday, including Union minister Thawarchand Gehlot, might be a precursor to much-awaited  Modi cabinet expansion in two days’ time but let’s not miss the significance of these new gubernatorial postings which are a milestone in independent India.

Never before so many from Scheduled Castes (SC), Scheduled Tribes (ST), Other Backward Castes (OBCs) and Jats, not to say the number of women, have ever been entrusted to adorn the highest constitutional post in federal States of India.

Gehlot, himself from SC and till now Union Minister for Social Justice and Empowerment, not to miss a leader for BJP in Rajya Sabha, would take over as new Governor of Karnataka.

The other SC names as Governors are Rajendra Arlekar (Himachal Pradesh) and Satyadev Narayan Arya (Tripura). Amongst those existing is Baby Rani Maurya, governor of Uttarakhand.

There are two from STs as Governors: Mangubhai Patel (Madhya Pradesh) who has years of political experience in Gujarat and is a long-standing leader of the tribal communities; and Anusuiya Uikey, as Governor of Chattisgarh.

The OBC Governors are a tale in themselves: Phagu Chauhan, belonging to Lonia community, is Governor of Bihar; Ramesh Bais would take over Jharkhand; Bandaru Dattatraya would shift from Himachal Pradesh to Haryana; Ganga Prasad Chaurasiya is Governor of Sikkim and Tamilisai Soundarajan serves in Telangana with additional charge of Puducherry.

Three Jat leaders as Governors are unprecedented in their own respect. Jagdeep Dhankhar is in a politically critical state of West Bengal; Acharya Devvrat is Governor of PM Modi’s home state of Gujarat; and then there is Satyapal Malik, Governor of Meghalaya.

In passing the names of two Muslim intellectuals, Arif Mohammad Khan (Governor of Kerala) and Najma Heptulla (Governor of Manipur) deserve mention as it does the ones of two Telugu Governors: K Hari Babu in Mizoram and of course Bandaru Dattatraya in Haryana now.

It’s the list of women Governors under the Modi Era (2014 until now) which is the icing on the cake, unparalleled in independent India. From 2014 onwards, it deserves a recall: Mridula Sinha (Late Governor of Goa), Draupadi Murmu (senior Tribal community leader), Najma Heptulla, Anandiben Patel, Babu Rani Maurya, Anusuiya Uikey, Tamils Soundarajan and Kiran Bedi. Five of them are from SC, ST, OBC and minority communities.

It bears a comparison with other prime ministers of Independent India, none of whom had as many women Governors during their tenures: