Reliving Kargil victory and those brave men who made it possible 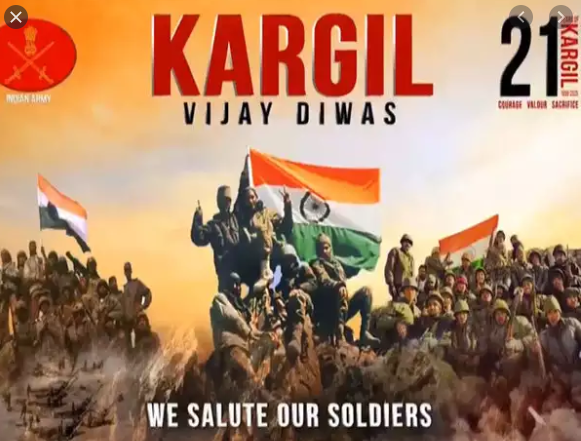 In the war that was waged on icy heights of Kargil district 21 years ago, 527 personnel of the Indian armed forces were martyred. Among them were 26 officers of different ranks and 501 soldiers of other ranks (ORs in Army parlance), sepoys, lance naiks, naiks, havildars, Naib subedars and subedars.

A very significant point that becomes clear from the foregoing lines is that the officers led from the front. The figures pertaining to casualties show that the ratio of jawans to officers was almost 20: 1. This is a very high ratio indeed and a bit of elaboration would perhaps help.

Ordinarily, in a fighting unit, a company of 130 men is led by a major, and another officer. There are thus two officers for 130 men or one officer to head 65 men. Perhaps the details regarding high officer casualties during Kargil war is understood better once we keep this ratio of 1: 65 in mind.

The tremendous bravery shown by junior leadership, officers who led the troops in the battles, shines through. The enthusiasm and valour of the young troops in most of these battles was unmatched.

Regarding high number of casualty of officers the Indian Army suffered during Kargil war, Lt Gen Ata Husnain (Retd) says this only showed their commitment to the cause. Their unflinching character and camaraderie built in the fighting units was reflected in these numbers.

We may recall here that Atal Behari Vajpayee government had barely completed a year in the office then. It had conducted nuclear tests in May 1998, within days of assuming power and this had to sanctions by many nations against India then.

The main intent of Pakistan army was apparently to interdict the supply route to Leh. Incidentally, the troops in Ladakh sector depend on stocks built up during the summer months.

As such, Pakistan had perhaps planned that cutting off supply routes could create hit readiness of troops in Siachen during winter months that were to follow. Attempts to dislodge India from Saltoro ridge has been made several times by Pakistan after 1984 when it lost the heights.

Incidentally, Pakistan Army Chief General Pervez Musharraf had also led an assault against the Indian troops dug in their strongholds in Siachen. In this assault, done by SSG commandos of the Pak Army, he had participated in 1987 or around that time.

This was a source of personal rankling for Musharraf and Kargil conflict was initiated by him. The civil leadership of the country, comprising PM Nawaz Sharif, and his ministers, were given the impression that Pakistan flag would start flying at Lal Chowk in Srinagar after this Kargil conflict.

The unflinching backing of the political leadership, the commitment and planning of the Indian Army, however, spoilt it all for Pakistan, and Musharraf personally.

Even the Pakistan Air Force (PAF) had not been taken on board regarding the Kargil intrusions by Musharraf, it became known later. The Indian Air force (IAF) also played an important role by launching Operation Safed Sagar, to supplement the efforts of the Indian Army under Operation Vijay launched to evict Pakistani intruders from Kargil heights.

Initially, Pakistan tried to wash his hands of the entire conflict claiming that it was “Kashmiri Mujahideen” who were occupying the higher ridges.

Later, it became clear that the regular troops of the Pakistan Army, and various companies of Northern Light Infantry (NLI) had been used. The movement of 8 Mountain Division, from north Kashmir, to Kargil, and assault on various Pakistan positions thereafter led to a severe beating for the latter.

In north Kashmir, the troops of 8 Mountain Division were deployed at much lower altitudes. Besides, they were doing counter-insurgency duties in that grid. From CI operations, these troops had to straight go into main assault role of high mountain warfare.

Incidentally, it bears mention here that 8 Mountain Division had been conceived for deployment in the north east, opposite Chinese positions. It was General V P Malik who had ordered its shifting from N-E to North Kashmir. As luck would have it, elements of this division were involved in throwing out the Pakistanis from Kargil heights.

Hitesh, son of a martyred soldier in Kargil, martyred Bachan Singh, is now a commissioned officer in the same regiment, 2 Rajputana Rifles. pic.twitter.com/wA5O4AFh1P

Four Param Vir Chakras were awarded during this war which lasted from May-end to mid-July in 1999. Two of these were given posthumously, and two to personnel who are still serving in the Army. Those who were awarded PVCs posthumously were Captain Vikram Batra of 13 JAKRIF and 1/11 Gorkhas, respective. Grenadier Yogendra Singh Yadav became the youngest recipient of PVC at 19 years for valour shown in the assault on Tiger Hill. The other man who received PVC was Rifleman Sanjay Kumar, also of 13 JAKRIF.

A couple of children of those who were martyred in Kargil war have joined the Army, some in the same units as their fathers. Hitesh Kumar’s father, Lance Naik Bachan Singh, of 2 Rajputana Rifles, was martyred in Kargil war. He is an officer commissioned in the same regiment now. His mother never flinched from preparing him from serving the nation and prepared him all these years assiduously, silently.

It is because of such great traditions and strong motivation in the face of grave dangers that our safety is guaranteed. We know that with men like Hitesh Kumar around, willing to sacrifice everything they have, India sure cane give a bloodied nose to its enemies.