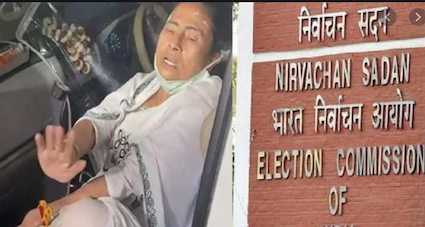 West Bengal chief minister Mamata Banerjee is indulging in “innuendos” and “averments” to “belittle” Election Commission is the opinion of the central poll authority in the country.

Mamata had wondered if EC was acting at behest of Union home minister Amit Shah and that her security chief has been removed and whether it’s been done to have her assassinated.

The response has been swift and sharp by Sudeep Jain, deputy Election Commissioner: “Notwithstanding the above meetings in Kolkata and in Delhi, if it is stated by honourable CM that the commission should meet political parties, it is only an attempt to belittle the institution of commission with repeated innuendos and averments”.

Further, the Commission ”maintains the position that they would not like to keep on being put in the dock for alleged proximity to any political entity etc. However, if CM persists in creating and attempting to perpetuate this myth for reasons best known to her, it is singularly unfortunate, and it is only for CM to adjudge as to why she is doing so.”

Things between the ruling party Trinamool Congress and Election Commission has continued to hit new depths in last few weeks. It began with transfer of officials who EC believed were not good enough to be entrusted with poll duty. It then led to put to bench the West Bengal police chief, DG Virendra. Thereafter, subsequent to Mamata Banerjee’s “injury” in Nandigram during her nomination day on March 10, her security chief Vikas Sahay was found to have caused lapse in security and removed by the EC.

To cap of this bitterness, Trinamool Congress believes it was a “conspiracy” in Nandigram which had Mamata injured. The Election Commission, in its findings, has found no evidence and termed it an “accident.”

In the letter, Jain indicated that they have seen the media reports of the rally, where she has raised “some of these issues”, mentioned earlier in a letter to the Commission, sent on March 14.

“In the absence of an authorised text” of the rally speech, they were responding to the Chief Minister’s letter, he wrote, enclosing a copy of the report after which they had suspended Banerjee’s security in-charge Vivek Sahay.