Report: Sonia to stay as Congress interim chief till 2024; never mind she didn’t campaign in assembly polls even once! 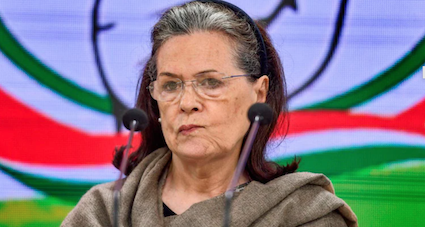 Sonia Gandhi would remain the Congress interim chief till 2024; Rahul Gandhi would remain footloose as he has been since 2019 and four vice-presidents could be chosen between Ghulam Nabi Azad, Sachin Pilot, Kumari Selja, Mukul Wasnaik and Ramesh Chennithala, if a report of RepublicWorld is to be believed.

Both Pilot and Azad are disgruntled players in the Congress set-up of subservience; Pilot, the ex-deputy chief minister of Rajasthan has rebelled once and promises another ever so often; and Azad is in that Group of 23 which often pens letter in remonstrance against the Congress hierarchy but don’t do anything beyond that.

It’s said that the much-delayed elections for the Congress’ president’s post could be held after the ongoing monsoon session of the Parliament.

Incidentally, Sonia Gandhi has not been very active in the public domain. She didn’t campaign in the recent assembly elections in Assam, Tamil Nadu, Kerala, Puducherry and West Bengal.

Since 2019, Congress has lost Madhya Pradesh, barely survived in Rajasthan and was battered in Delhi, Bihar and Haryana polls too. It won Jharkhand polls in alliance. It also is a junior partner in Maha Vikas Aghadi (MVA) government in Maharashtra, dominated by Shiv Sena and NCP.

In May, Congress had passed a resolution, strengthening the hold of the Gandhis. Senior leaders, some 23 in numbers, had sought structural changes within the party; internal election to the CWC even at state levels, the formation of an independent election authority and a full leader at the home. This group of 23 had even questioned Congress’ alliances during the state polls.