Rohingyas provided with 200 cows for Bakra Eid by Bangladesh government 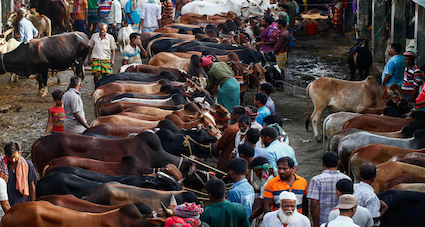 As per a report, Not only government but NGO Islamic Relief also provided 135 cows to Rohingyas. The Rohingyas carried the portraits of Bangladesh Prime Minister Sheikh Hasina while welcoming the cows to show gratitude to her.

Zafar Alam, senior project manager of Islamic Relief Bangladesh, said, “Islamic Relief had brought 135 cows from Bogura for the Rohingyas on Bhasan Char. The beef from each cow would be distributed among 35 families so that they would get around 2kg of meat each.”

Islamic Relief is also providing 375 cows for Eid to the Rohingya camps in Cox’s Bazar. It will also distribute 150 cows among the locals of the host community living near the camps.

Meanwhile, PETA (People for the Ethical Treatment of Animals) organisation, which was fighting with Amul, advocating them to opt for ‘plant-milk’ so that cattle don’t get tortured, hasn’t even acknowledged this matter!