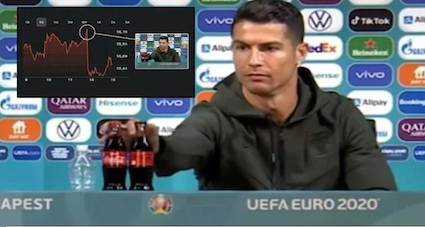 All legendary footballer Cristiano Ronaldo did was to move a couple of bottles of Coca-Cola out of his sight during a press conference. Result: The  soft drink giant lost nearly $4 billion of its market value.

It was in Budapest, ahead of their clash against Hungary on Tuesday, that the 36-year-old footballer Ronaldo arrived to attend Portugal’s press conference with manager Fernando Santos at Euro 2020.

Two bottles of Coca-Cola were placed in front of him which he quietly removed, known as he is of no fan of carbonated soft drinks.

While doing so, Ronaldo also asked for “Agua” (water) in Portuguese. The video took little time in going viral on social media.

Coca-Cola is one of the major sponsors of the 2020 UEFA Euro championships.