Roshni Land Scam: The art of blaming BJP when the directive is from HC 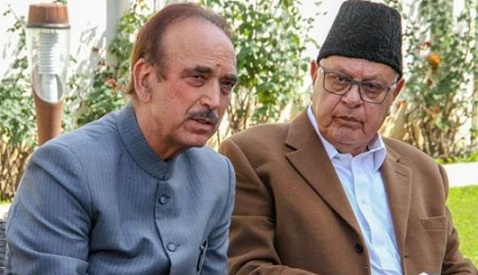 The full extent of the darkness that was spread in Jammu and Kashmir through Roshni scheme is coming to the fore now. Every other day, one newspaper or the other is full of lurid details about beneficiaries of the loot of land facilitated through legislations. By the National Conference government headed by Farooq Abdullah in 2001, by the PDP under Mufti Mohammad Sayeed and then Ghulam Nabi Azad of the Congress.

(Meanwhile, as I write this, news has filtered in that former Jammu & Kashmir minister & Congress leader Taj Mohiuddin has been booked by Central Bureau of Investigation (CBI) in connection with the Roshni land scam.)

In fact, the divisional commissioners of both Jammu and the Kashmir region are getting the list of beneficiaries published in the papers through paid advertisements. Some news items too are appearing in Hindi, English and Urdu newspapers published from Jammu and Srinagar. Social Media platforms are also full of stories about the organised loot of government land that went on for decades.

This loot was facilitated by successive governments themselves. So much so that the beneficiaries did not pay even 1/100 or 1/1,000th concessional land cost that was determined for the land they had encroached. The stated objective of the scheme, mopping up money from encroachers for development, never happened.

A list published today in a local news mentions name of 10 encroachers, beneficiaries of Roshni encroachments in Srinagar, who are all powerful businessmen NRIs! Doing business in Dubai and the USA. In Jammu, the list of beneficiaries carries the names of retired IGP Nissar Ali, retired SSP Mirza Rashid, Talib Choudhary (PDP leader), Mahant Manjeet Singh, a powerful Sikh religious leader, Zehan Din (relative of former minister Aijaz Khan of the Congress), and others. The PDP has also built an office on an encroached patch of land in Sunjwan, the list revealed.

The names of retired IAS officer Farooq Shah, Manzoor Ahmed Shah (related to the officer), Fehmeeda Shah (related to the officer) and some doctors working abroad have also been mentioned. A businessman owning a Tata showroom, several persons related to politicians, a couple of relatives of Farooq Abdullah, some relatives of Bakshi Ghulam Mohammad, once top leader of J&K and prominent businessman Amin Tramboo also figure among the beneficiaries.

An interesting trend is being witnessed with the NC, the PDP and the Congress leaders saying these lists are inspired by the forthcoming District Development Council (DDC) elections. This is contrary to the facts though as the lists are being published due to the orders of the J&K High Court. The court has also said that these lists should be put on websites.

It has also been disclosed that over and above the 20 lakh kanals alienated under Roshan scheme, hundreds of other encroachers are also there. Leading the way is Farooq Abdullah whose house in Bhatindi area of Jammu is on encroached land of seven kanals and seven marlas. Incidentally, one kanal is equal to 5,400 square feet, and not a penny has been paid for the encroached land. At a conservative estimate, the value of the land may be over Rs 10 crores, at the very least.

Some politicians are also making efforts to create a narrative that the administration, and by some stretch of imagination, the BJP is harassing the poor people, specially Gujjar Bakerwals. Mehbooba Mufti is spreading this most assiduously though it is a fact that under Article 370, these communities were not entitled to political reservations under the Scheduled Tribes category.

Word is being spread that the Lieutenant Governor, and the BJP, must find a way to overturn the high court ruling and protect the illegal beneficiaries! Several parties are now targetting the BJP as to why the names of leaders of this party is not appearing in the list of beneficiaries of Roshni. The fact of the matter is that the party cadres, as also leaders, were targetted earlier and the question of regularisation of their illegal holdings, if any, just didn’t arise.

In the days to come, more names of prominently citizens, politicians, former bureaucrats will be made public. The NC, the PDP and the Congress candidates in the DDC polls are being accused of promoting systematic corruption. Be it Anurag Thakur, Jitendra Singh, or Jairam Thakur, star campaigners of the BJP are making repeated references to the Roshni scheme in their campaign rallies.