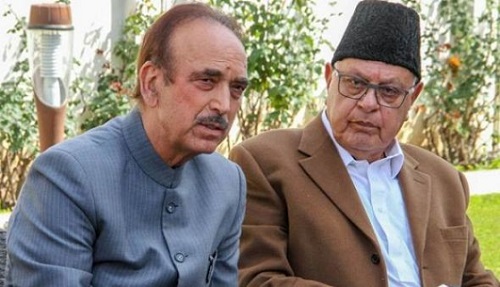 Roshni scheme was finalized during Farooq Abdullah’s tenure as Chief Minister of Jammu and Kashmir way back in 2001. Under this scheme, all sorts of encroachments of government lands were virtually encouraged. Instead of initiating any action against the land mafia, land sharks and organised loot of government property, the irregularities were given a legal cover.

It was said at that time that the scheme will fetch the government over Rs 25,000 crore and this will be utilised for harnessing hydel power potential of the state. This is why the scheme, which has been declared a scam, and entirely unconstitutional “ab initio”, by the Jammu and Kashmir High Court, was named Roshni. Of course, it was with utterly dark motive of wanton loot of land that the scheme had actually been hatched.

In fact, over 20 lakh kanals of land got alienated from the government and passed on to private owners. What was the total money that came into the government kitty for construction of hydel power projects? Well, the question remains unanswered till date as the government never made the figures public.

Out of the promised Rs 25,000 crore, the first few years brought in, may be Rs 25 crore, and three zeroes went missing in the files, and government records. In the aftermath of the verdict of the Jammu and Kashmir High Court delivered last month, the UT government now plans to get back over 20 lakh kanals of land that was grabbed by the encroachers. The timeline that the government of Union Territory (UT) of Jammu and Kashmir has set for itself is only six months.

One doesn’t remember another instance where such a huge chunk of land has come back to any government, be it in any state, or the Central government, once it gets alienated. In fact, over the past three or four decades, there have been countless examples of the encroachers making merry as the governments regularised the illegality. Regularisation of illegally set up jhuggi jhonpdi (JJ) colonies for crass political considerations is something that keeps happening all over the country all the time.

If the government plans fructify, we can see all the encroachers lose their hold over their illegal gains by as early as May 2021. Let us give or take a couple of months, that may be lost due to technicalities of one type or the other, bad weather and such other imponderables.

An interesting aspect of getting the encroached lands vacated is the naming, and in a way shaming, powerful politicians, bureaucrats, policemen and their supporters. This is likely to happen soon, sooner rather than later, as the court has ordered that the names of all the beneficiaries of the Roshni scheme/scam should be published. These names will soon be in public domain as the court has ordered that they be put on website and the revenue authorities will be authenticating all the data. This is also something that has not happened on such a large scale even in some other case anywhere else in India. The true impact of the reversion of encroached land back to the government will take more than six months to unfold. Land mafia, land sharks and such terms are fairly common in everyday usage but it appears that they stand to lose the most.

We also need to remember here is that the scheme was brought in as early as 2001 during the tenure of Farooq Abdullah. In retrospect, we can definitely say that this acted as encouragement to encroachments by the political class of that day. The scheme got another boost when Ghulam Nabi Azad carried forward what his predecessors had done, and termed it as Roshni II. The court terming all the transactions done under the scheme as “unconstitutional” is a severe blow to the credibility of both Abdullah and Azad. The intervention of the courts in cases like these often leads to prospective orders and those who had looted the exchequer escape the long arm of law.

Not in this case as the scheme has been described a scam ab initio and as such beneficiaries stand to lose substantially. Hopefully, all constructions made on encroached lands all through the UT will get demolished in due course of time.

In 1995, the Supreme Court had heard a similar case, but that related to allotment of a park to a political family by DDA in Sarita Vihar. The verdict in the case titled Dr G N Khajuria versus DDA is going to impact what happens in J&K in near future in a major way.