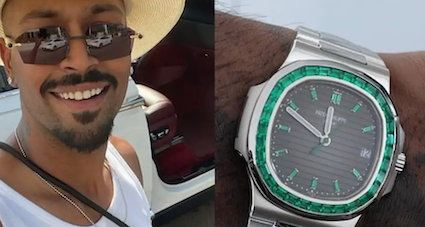 On his return from the United Arab Emirates, Indian cricketer Hardik Pandya found two of his luxury watches seized by the customs. The reports claims that it was worth Rs 5 crores.

Pandya, in a tweet, has now clarified thus:  “Early on Monday morning, 15th November, on my arrival from Dubai, after picking up my luggage, I voluntarily went to Mumbai airport customs counter to declare the items brought by me and pay the requisite customs duty.”

“The cost of the watch is approximately Rs. 1.5 crore and not Rs. 5 crores as per the rumours floating around on social media,” he emphasised.

Back in 2019, when he was injured and had undergone surgery, Pandya had shared an image of himself on a hospital bed sporting a shiny watch. Social media users claimed the watch was a Patek Philippe Nautilus watch in gold. Reports claimed the model was the self-winding Rose Gold Nautilus (in 18K rose gold case) with a reference number 5980/1R and Caliber CH 28‑520 C, said a report.