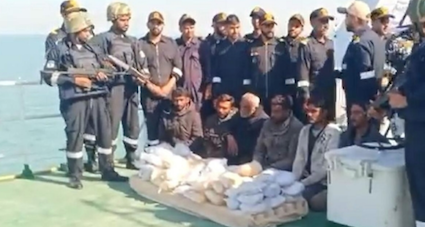 In a major crackdown, The Coast Guard and Gujarat ATS have seized 77 kg heroin worth around Rs 400 crore.

Gujarat’s defence PRO in a tweet said the Coast Guard in a joint operation with the state ATS apprehended the Pakistani fishing boat ‘Al Huseini’ with six crew members on board- which entered Indian waters illegally and has been taken to Jakhau coast in Gujarat’s Kutch district.

The ATS had said the consignment was sent by Pakistani drug dealers from Taliban-controlled Afghanistan to India via the Arabian Sea “on a daily basis”, and the same is “not possible without help from the ISI”.

Gujarat ATS Deputy Inspector General (Operations) Himanshu Shukla informed that there had been several attempts from Pakistan especially in the last four years, but all such attempts were foiled

This year, heroin worth Rs 900 crore was seized in different operations, including 120 kg of the contraband valued at Rs 600 crore recovered from Morbi district, which was also sent by a Pakistani smuggler and brought to the Gujarat coast through sea route, the ATS officials said.